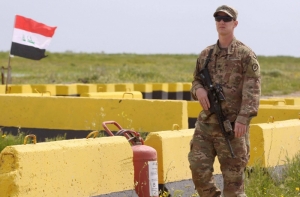 BAGHDAD – Iraqi political circles described the decision of the international coalition led by the United States to end the “combat missions” in Iraq as a second withdrawal no less bad than the first withdrawal decided by former President Barack Obama in 2011, which opened the door for ISIS to infiltrate into Iraq and later attack on Iraqi forces and control of large areas of land, then the extension of the Iraqi militias loyal to Iran under the name of the Popular Mobilization to control large areas of northern and western Iraq and open the land corridor from Iran towards the Mediterranean.

In the war launched by the Iraqi forces and the Popular Mobilization Forces against ISIS in northern Iraq, the American combat aircraft turned to the role of the air force of the crowd, which led to the defeat of ISIS and caused great destruction in a number of major cities in Iraq, especially the city of Mosul.

Mustafa Salem: The militias may call in Iranian forces to compensate for the American withdrawal
. These circles said that President Joe Biden, with this hasty decision, will pave the way for the Shiite militias to take control of the country and leave the rope to Iran to run the affairs of Iraq from behind the curtain by empowering its allies. And it considered that the presence of US forces in some bases in the Kurdistan region or in nearby bases in northern Syria would not hinder the militias from implementing their plan aimed at controlling all of Iraq and subjecting it to its hegemony.

Obama had announced in December 2011 the withdrawal from Iraq, and that Washington would continue to train and equip Iraqi forces, considering that the withdrawal would give the United States the opportunity to focus on “the battle against al-Qaeda and achieving victories against its leaders.” But this strategy failed two years after this withdrawal.

Commenting on that withdrawal, the late Republican Senator John McCain said that “the American sacrifices were wasted by an administration that wanted to leave, and did not want to remain and consolidate the gains made in American blood and money.”

Iran and its affiliated groups view this withdrawal as a victory for their plan, which aimed to compel the Americans to withdraw through political pressure on the government of Mustafa Al-Kazemi and the Iraqi parliament to adopt an official position calling for the withdrawal of American forces, as well as limited missile attacks on the positions of American forces.

Although the Iraqi Prime Minister is not enthusiastic about the Americans’ withdrawal, he sought to appear in the image of those who stand within the trend led by Iran’s allies, at a time when Iraqi political observers say that Al-Kazemi cannot stand alone against the Iranian trend and that he sought to meet with the American ambassador Matthew Tueller before the announcement. about the American decision.

And last Saturday, Al-Kazemi held a meeting with the American ambassador, during which the file of the withdrawal of American combat forces from Iraq was discussed, and their tasks shifted to advisory and support.

According to a statement issued by Al-Kazemi’s office, the latter discussed with Tueller “the progress made in ending the combat role of the coalition forces in Iraq, according to the outcomes of the strategic dialogue, and the transition to the role of advice, assistance and empowerment,” and he did not reveal any understandings regarding these files.

In a tweet, Iraqi National Security Adviser Qassem al-Araji announced at the conclusion of a meeting with the coalition leadership, “Today (Thursday) we ended the last round of dialogue with the international coalition, which we started last year, to officially announce the end of the combat missions of the coalition forces,” adding that the relationship “will continue in the field of training.” Counseling and Empowerment.

About 2,500 US soldiers and 1,000 coalition troops will remain in Iraq. These forces are not fighting and have been serving as an advisory and training role since the summer of 2020.

The international coalition led by Washington – which includes more than 80 countries, including France, Britain and several Arab countries – was formed in 2014 to support attacks in Iraq and Syria against the Islamic State.

At a time when US reports say that Washington will not abandon the scene in the country in favor of Iranian influence, observers consider that the US move will be a victory for Iran, which it will use within the negotiation cards with the United States on the nuclear file and the issues of Iran’s growing influence in the region.

Iraqi political writer Mustafa Salem said in a statement to “Al-Arab” that “all parties know that the withdrawal is not complete, and it will not be so,” warning that “the crowd militias believe that the departure of the American forces allows them – and for conceivable reasons – to summon the Iranian forces to replace them.” “.

Nicholas Heras: The Biden administration wants to avoid crises, especially with Iran,
and Salem considered that the Iraqi street is so drained that this issue will not be a priority, and that what is left of it in the circle of attention does not want the departure of American forces while watching the failure of government forces that do not need to Advice the Americans as much as they need to be Iraqi and national forces.

Nicholas Heras, a researcher at the New Lines Institute, believes that the United States will maintain “the same military role in Iraq,” but what changes is the “message.”

He explains that “the political and security environment in Iraq is so tense that the Biden administration wants the United States to stay out of the limelight and avoid crises, especially with Iran.”

In recent months, dozens of missile attacks or bomb attacks launched by unmanned aircraft have targeted US forces and US interests in Iraq. These attacks are not claimed, but the United States attributes them to pro-Iranian factions.

With the December 31 deadline for withdrawal approaching, some networks close to the pro-Iranian factions raised the ceiling of their threats on social media to demand a full US withdrawal, although it was not raised before.

Heras believes that changing the discourse on the “US military presence in Iraq” also reflects a new reality that “the Iraqi security forces have greater capabilities than before to attack the Islamic State.”