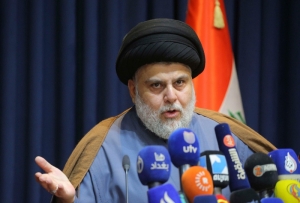 Baghdad – The leader of the Sadrist movement in Iraq, Muqtada al-Sadr, warned on Sunday evening against interfering in the work of the Independent High Electoral Commission, to change the results of the early parliamentary elections that took place on the tenth of last month, a few days before the final results were announced.

Al-Sadr, whose political current won the largest number of parliament seats, said in a tweet on Twitter, “We are proud and proud as we announce the integrity of the work of the Independent High Electoral Commission and the accuracy of its professionalism in all details of its work. We refuse to interfere in its work on the one hand, and we affirm the safety of its members and affiliates.” on the other hand.”

Al-Sadr added, “We condemn and denounce all the political and security pressures on the Independent High Electoral Commission from the first day of its work to this day.

The Sadrist leader warned, “We should not interfere in the work of the Electoral Commission and the court and in its ratification of the results that some want to change, so that they can keep pace with the larger bloc, so that they can disrupt the majority government.”

On Monday, the Iraqi “Al-Fatah” coalition expected a “difference change” in the results of the recent early parliamentary elections, with the results of 18 percent of polling stations cancelled.

The head of the coalition, Hadi al-Amiri, said, during his meeting with the head of the Turkmen Front, Hassan Turhan in Baghdad, in a statement, “The decisions of the judiciary to invalidate some polling stations that did not close at the specified time (15:00 GMT) will lead to the invalidation of more than 6 thousand stations.” vote”.

He added, “Also, nearly four thousand stations were canceled due to the presence of repeated fingerprints, which means that 10 thousand stations will have their results canceled, which constitutes 18 percent of the total stations in Iraq, which number 55,000.”

He explained, “These numbers are impressive and will make a difference and radical change in the results of the early parliamentary elections,” according to the same statement.

The Al-Fateh Alliance, the political umbrella for armed Shiite factions, including “Asa’ib Ahl al-Haq”, “Hezbollah Brigades” and “Al-Nujaba Movement”, had filed a lawsuit before the Federal Court to annul the results of the recent legislative elections, in an attempt to block the way before the Electoral Commission before its announcement. The final results.

The Shiite parties loyal to Iran and the losers in the elections, most notably the Alliance of Conquest, State of Law, National Wisdom and Victory, demand the re-counting of the parliamentary elections manually for all electoral stations, against the background of their adoption of proposals to question the election results and the occurrence of fraud.

This comes after violent sit-ins in Baghdad, especially in the vicinity of the Green Zone, in protest against the election results. It also comes amid veiled threats directed to the Electoral Commission, who demanded that the losing blocs recount and manually count the ballot results.

Over the past days, the losing Shiite militia factions have issued messages of terror and threats to peaceful security to pressure the change of results, but according to observers, they are unable to implement them on the ground because they do not have enough popular bases to do so, which was evident through the mobilization of their supporters to protest in the region. green.

And earlier on Sunday, a member of the media team of the Election Commission in Iraq, Imad Jamil Mohsen, said that “it is hoped that the final results of the elections will be announced within the next two days.”

He added that “the appeals had a strong impact on the results, as the stations canceled by the judiciary changed the number of seats” for some political forces.

Mohsen explained that “the Federal Court will ratify the names of the winners of the elections, while the judiciary will approve the appeals and consider them to be (mandatory).”

And Shiite forces objecting to the results of the parliamentary elections in Iraq announced last Friday that they had obtained 8 new seats after the manual counting of the poll results.

And since last month, Iraq has been experiencing political tensions, with armed Shiite factions rejecting the preliminary results of the elections that took place on the tenth of last October, saying that they were “fabricated” and demanding a manual recount of the votes.

Recently, the Electoral Commission announced that it had completed the manual counting of votes in the polling stations, in which candidates and political forces submitted appeals regarding their validity, and then submitted their appeals and recommendations to the Judicial Commission for Elections for final settlement.

According to preliminary results, the “Sadr bloc”, affiliated with Muqtada al-Sadr, topped the results with 73 seats, while the “Progress” bloc led by the current Speaker of Parliament, Muhammad al-Halbousi, won 38 seats, and in the third place came the “State of Law” bloc led by former Prime Minister Nuri al-Maliki with 34 seats.

The Al-Fateh alliance suffered a severe loss during the parliamentary elections that took place last month, by obtaining only 14 seats, down from 48 seats during the 2018 elections.