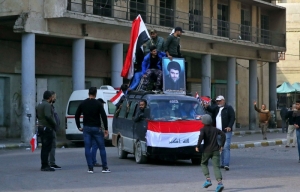 BAGHDAD – Signs of a confrontation are looming in Iraq between the Sadrist movement led by Muqtada al-Sadr and two parties supported by Iran, the Shiite militias and former Prime Minister Nuri al-Maliki, after general elections that did not lead to decisive results that would allow the winners to form a new government.

Al-Sadr alone won 74 seats in the Iraqi parliament, which consists of 329 deputies, to achieve first place at the national level, more than double that of his nearest competitor.

But this fact seems deceptive after other Shiite forces, namely the State of Law coalition led by Maliki and the Fatah Alliance, which includes the Badr militia led by Hadi al-Amiri, the Asa’ib Ahl al-Haq militia led by Qais Khazali, the Rights Movement of the political wing of the Hezbollah Brigades militia, and the National Contract List led by Faleh al-Fayyad, to form A parallel gathering of Al-Sadr’s bloc on the numerical level under the title “Coordination Framework”, emptying the latter’s victory of its content.

The conflict of wills is unbalanced, as Al-Sadr wants to re-assign Al-Kazemi to form the government, in exchange for the opposition of the coordination framework, which has less than a quarter of the number of seats in the Iraqi parliament.

The framework forces, which collectively hold about seventy parliamentary seats, insist on excluding Mustafa Al-Kazemi, the current prime minister, from the list of candidates to form the next government, contrary to the desire of Al-Sadr, who made understandings earlier with the Sunni and Kurdish parties that won the elections to ensure the political majority.

The framework forces are counting on Iranian support to ensure their representation in the government with a weight equal to the weight of the Sadrist bloc, which left political consultations on power-sharing in the next four years at a dead end.

Parties within the coordinating framework suggested the possibility of limiting al-Sadr’s political role in the event of success in preventing him from forming the next government, which sparked a sudden Sadrist response.

The response came through an audio recording of the prominent leader of the Sadrist bloc and deputy head of Sadr’s negotiating team Nassar al-Rubaie, who said that the Sadrist movement could arrest al-Maliki, Khazali and al-Amiri within ten minutes if asked to do so.

Al-Rubaie put this audio recording himself in an electronic group that includes dozens of members, most of whom are politicians and journalists, confirming that he wanted to connect it to the coordination framework.

Al-Rubaie said that the Sadrist movement has a number of overt armed arms, such as the Mahdi Army, the Promised Day Brigade and the Peace Brigades, and it also has a secret army of two million armed fighters, who can curb the militias and their leaders if necessary.

Al-Rubaie criticized the militia’s behavior of the gathering of the losing forces in last October’s elections, and said that the militia leaders are “empty” and follow the treachery method in dealing with their opponents.

He added that the Badr Organization led by Hadi al-Amiri was an agent of Iran and was involved in the killing of Iraqi prisoners during the eighties war with Iran, noting that the same organization returned after 2003 to Iraq to launch a major campaign of assassinations against pilots, doctors and various Iraqi competencies.

Al-Rubaie said that Al-Sadr does not care about Maliki or the militia leaders and does not take them into consideration, and if he did that, he would have eliminated them in one hour, defying them to respond to anything the leader of the Sadrist movement said.

Observers say that the political situation in the Shiite area is close to a clash between the parties who own arms, while the state is unable to play any role in it.

Al-Rubaie’s speech translates the recent signals issued by Iran regarding its unwillingness to go behind the wishes of the Shiite losers in the October elections, leading to the outbreak of Shiite-Shiite fighting.

Informed sources told the “Al-Arab” correspondent in Baghdad that the messages received by various militia leaders from Iran recently called for acceptance of the election results and agreement with al-Sadr in the form of participation in the new government, stressing that Iran had explicitly warned the Shiite militia leaders against slipping into an armed confrontation with al-Sadr or Government.

Observers point out that the conflict of wills is unbalanced, as Al-Sadr, supported by all Sunni and Kurdish forces, wants to re-assign Al-Kazemi to form the government, in exchange for the opposition of the coordination framework, which has less than a quarter of the number of seats in the Iraqi parliament, which explains the Iranian position.

According to observers, Iran does not want to deepen the political isolation experienced by its allies in Iraq, after the huge popular punishment they received through the election results.

The framework forces insist on excluding Mustafa Al-Kazemi, the current prime minister, from the list of candidates to form the next government, contrary to the desire of Al-Sadr

Iran also wants to secure its interests through new Shiite parties, which won a landslide victory in the elections, which confirms its dependence on solid popular bases.

But they warn against rushing to judge the Iranian position, which could use many maneuvers, before revealing the nature of its options.