Chevron’s return to Iraq is more than a calculated risk

Chevron’s return to Iraq is more than a calculated risk 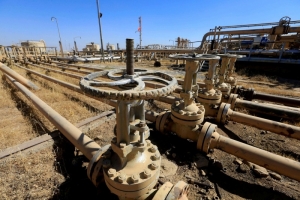 BAGHDAD – The Iraqi government announced on Tuesday that it had decided to authorize the Iraqi National Oil Company to negotiate directly with the American company, Chevron, regarding the implementation of the Oil Ministry’s plans to complete giant projects in the oil and gas sectors in Nasiriyah, Dhi Qar Governorate, in a move that observers said gives a strong indication of the return of American companies. to Iraq after it was withdrawing from it due to considerations related to the security situation and the increasing Iranian influence there.

A statement by the Iraqi Oil Ministry said, “The project includes the completion of a group of giant projects in the oil and gas and water injection sectors, with a targeted initial capacity of 600,000 barrels of crude oil per day within seven years of starting work.”

And experts in the field considered that an investment of this size, and in an area of ​​fields that can produce the equivalent of a country’s production, confirms that American companies have changed their view of Iraq and are accepting risks regardless of the political and security conditions that have not yet reached the stability that major companies such as Chevron are looking for. .

They added that a project such as this confirms that the Americans who risked invading Iraq in 2003 would not abandon the economic opportunities it provided for security challenges or internal political conflicts, under the auspices of Iran, and that the military withdrawal announced by the American forces from some of their bases does not mean the final abandonment of Iraq.

The oil and gas that the American company will extract from Iraq could represent two balancing elements in the oil market in the future and contribute to breaking the Saudi-Russian bilateral leadership over the OPEC + bloc, which is now controlling the quantities supplied and pushing up prices, in contradiction to what the United States is seeking.

Iraq contains huge reserves of gas and oil, as it is the second oil producer according to the Organization of Petroleum Exporting Countries (OPEC), but it is facing an acute and chronic energy crisis that fuels social anger.

In parallel with Washington’s gains from returning to the Iraqi arena, this offer also gives a strong impetus to Iraq, which is suffering from a severe economic crisis and is seeking to obtain foreign investments. It also effectively contributes to solving the electricity crisis that it suffers from and has made it dependent on Iran.

Iraq currently produces 16 thousand megawatts of electricity, which is much less than its estimated need of 24 thousand megawatts, which amounts to 30 thousand in the summer. The country witnesses frequent power cuts, especially during the summer when the temperature exceeds fifty degrees.

The ministry’s statement stated that the plan includes the establishment of solar energy projects to produce electricity, and added, “It is hoped that these projects will contribute to strengthening and sustaining national production, advancing and developing infrastructure, and increasing development opportunities for private sector companies in the governorate, as well as providing job opportunities.”

And last September, Iraq announced a contract with the French group “Total Energies” to invest in the field of gas and oil and in the exploitation of solar energy, with a value of 27 billion dollars, in a deal that raised questions about its connection to a previous visit by the French President to Baghdad and the release of statements in support of the Iraqi government.

Total CEO Patrick Pouyanne said during the signing ceremony that the company would start with an initial investment of $10 billion, noting that engineering work would begin “immediately”.

Talk about British Petroleum thinking about withdrawing from Iraq prompted the Iraqi Oil Minister, Ihsan Abdul-Jabbar, to warn last July that the Iraqi environment was no longer suitable for attracting major companies.