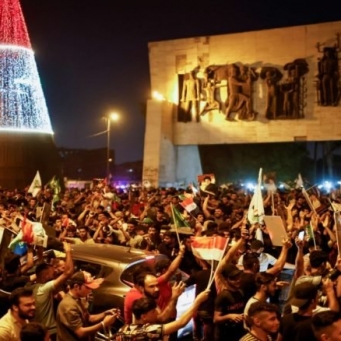 The Iraqi elections were nothing but a recording of a reality represented in the retreat of a section of the parties and forces loyal to Iran in light of the advance of the “Sadr bloc” led by Muqtada al-Sadr. This conclusion can be drawn, although it is not known whether Muqtada al-Sadr can be independent of Iran and what margin of freedom this Iraqi politician has. This politician, who is at the same time a clergyman, belongs to a family with a long history. It is certain that Muqtada al-Sadr’s words after the issuance of the preliminary results of the elections are reassuring, especially when he referred to the rejection of any illegal weapon. This was a clear reference to the weapons of the “Popular Mobilization” militia. This is a statement that clearly excites Iran and has a positive resonance inside Iraq.

However, the question about Muqtada al-Sadr’s position on Iran remains to be presented strongly in light of the experiences that a cleric and politician went through who distanced himself from Tehran and then approached it and watched in the “Guide” Ali Khamenei’s assembly as if he were a family member. This indicates two things; The first is his hesitant personality, and the second is his inability to get out permanently from under the Iranian umbrella. There is a third matter that must be mentioned in the form of a question: Is Muqtada al-Sadr’s audience dominated by Muqtada al-Sadr?

Despite all this, the leaders of the parties directly affiliated with the “Islamic Republic”, with the exception of Nouri al-Maliki, could not achieve good results. As for Hadi al-Amiri, the leader of the “Al-Fateh Alliance” that brings together Iranian-backed militias, he was dealt a heavy blow. This decline in the popularity of those directly loyal to Iran and the militia’s arms reflects restlessness among Iraqi Arab Shiites. This restlessness came at a time when Iranian influence in Kurdistan has declined in light of the disappointing results recorded by the candidates of the Kurdistan Democratic Union, which has become divided within itself in the absence of its historical leader, Jalal Talabani.

In any case, there is Iranian concern about what is going on in Iraq, where signs of independent political groupings have begun to emerge that reject the fait accompli imposed by the American occupation and the regime that was born from its womb. Iran is simply afraid of losing its control over the political game in Iraq, regardless of the election results and the opinion of the Iraqi citizen who possesses a minimum of patriotic spirit. This citizen discovers with the passage of time that Iran is Iran and Iraq is Iraq, and that removing the borders between the two countries is nothing but the downfall of the whole region and not of Iraq alone.

This Iranian insistence on grasping the Iraqi card completely explains the approaching Iranian return to the Vienna negotiations with the Americans, Chinese, Russians and Europeans. Iran will not be able to impose its conditions in these negotiations regarding its nuclear program without appearing as a strong party that controls four countries: Iraq, Syria, Lebanon and Yemen. Iran insists on asserting that it can do whatever it wants in the four countries. This was confirmed by the release, in agreement with France, of the Lebanese government headed by Najib Mikati on the one hand, and the Iranian Foreign Minister Hossein Amir Abdollahian’s visit to Beirut on the other. Abdollahian became the first foreign minister to visit Lebanon after forming a new government and waiting for thirteen months.

There is more than the Iraqi elections. There is the Iranian role in Iraq. Who controls Iraq? This is the big question in a pivotal country whose future depends to a large extent on the fate of the regional balance

There is unconfirmed information that the commander of the Quds Force in the Iranian Revolutionary Guard visited Baghdad with the polls closed. On the other hand, it is confirmed that the Iranian foreign minister had visited Lebanon. The two visits may be inspection visits to Iranian properties in the region. Rather, they are among several Iranian cards used in negotiating with the “Great Satan.” All that matters is that Iran wants to prove that its entry into the Vienna negotiations will not be from a position of weakness and that the US administration must be convinced that there is no room for any modification to the agreement regarding its nuclear file signed in the summer of 2015 under Barack Obama.

Iran believes that time is working in its favor and that it has done well in delaying the return to the Vienna commissions. It is not known whether this is true or not. It is known that the US administration is lost and has no interest but to prevent Iran from developing nuclear weapons. In fact, Iran can benefit from this American loss and from the Americans’ ignoring the concerns of the Arab countries, primarily the Gulf states, about Iranian missiles and drones, and from the transformation of northern Yemen into a mere Iranian missile base.

It is clear that the Iraqi elections were important. Holding the elections was a success for Prime Minister Mustafa Al-Kazemi, who turns out to have strong channels of communication with Tehran… He is also a man who seeks a balanced Iraqi role in the region through understanding with the neighboring Arab countries. In addition, the Iraqi elections revealed a rejection in the Iraqi street of the “Islamic Republic” and the values ​​and lifestyle it is trying to impose on the Iraqis.

This rejection has not yet crystallized clearly, despite its appearance through the decline of the parties directly affiliated with the Iranians.

Only time will reveal whether Iran is strong or not… Or is it all that the new US administration is not ready to confront it and stand behind its allies in the region and support them strongly. Instead of entering into labyrinths associated with this type of question, there is a need to develop an Arab strategy that is compatible with the two challenges facing the region. The first challenge refers to the insistence of the “Islamic Republic” on pursuing its expansionist project, unaware that it has no model to export to the Iranian interior and to neighboring countries, near and far, other than destruction and devastation. As for the second challenge, it is represented by an American administration that does not know what it wants on the one hand and ignores that it cannot abandon its allies in the region and leave them to be at the mercy of Iran, its missiles and sectarian militias, on the other hand.

There is more than the Iraqi elections. There is the Iranian role in Iraq. Who controls Iraq? This is the big question in a pivotal country whose future depends to a large extent on the fate of the regional balance.