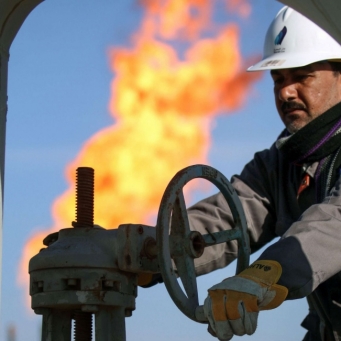 The Iraqi government turned its attention to the forgotten resources in the desert areas in order to make more use of the natural resources, in an effort to speed up the reform plans, which are still proceeding very slowly.

The Ministry of Oil revealed in a statement published on its Facebook account that it plans to launch a huge project to explore for natural gas in the country’s western desert.

A statement was quoted by the Minister of Oil, Ihsan Abdul-Jabbar, during an inspection visit to the Oil Exploration Company last Thursday, as saying that “the company is studying the approval of a giant exploration project in the Western Desert, which is one of the promising investment opportunities for natural gas (free gas) and the company attaches great hopes to it as a result of previous studies and surveys.”

The concerned authorities in the Oil Exploration Company will start preparing an evaluation study and inventorying all information about the exploration blocks in the mentioned area with the aim of unifying and approving them, monitoring the appropriate financial budget for them, and announcing the launch of the largest exploration project for free gas.

Abdul-Jabbar says that the western region is gaining great importance in the field of exploration and surveys, and that the state oil company will harness all its technical capabilities to invest in gas by drilling exploratory wells.

Ihsan Abdul-Jabbar: The company is studying the approval of a giant exploration project in the Western Desert

In order to implement these projects, which will be one of the most important pillars of the Iraqi economy, which depends excessively on oil revenues and sustainable development, they will need the approval and support of the government as it will add new energies to the country’s gas production capabilities.

It seems that the Western Sahara has become one of the targeted and major solutions that can give independence in the issue of using natural gas away from Iranian supplies for the production of electric power and as a main source for the petrochemical and other refining industries.

Abdul-Jabbar pointed out that the National Oil Company is also interested in seismic survey operations in Najaf Governorate, which aims to exploratory drilling operations for the promising patches in the province and the proportion and quantity of hydrocarbon reserves in it, whether oil or gas.

According to the statistics of the Ministry of Oil, Iraq’s gas reserves amount to 132 trillion standard cubic feet, while the ministry affirmed its keenness on the optimal investment of associated gas and free gas to meet the country’s gas energy needs to secure the uses of electric power generation and petrochemical industries and in other industrial fields.

For years, Iraq has been importing gas destined to operate power plants from Iran, to fill the shortage of electric power, especially in the summer when temperatures rise to about 50 degrees Celsius.