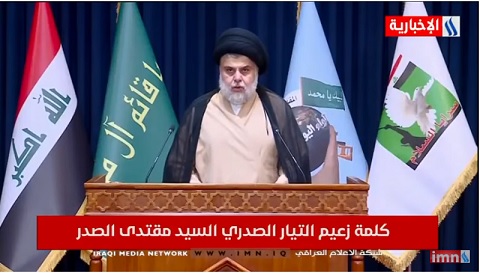 The leader of the Sadrist movement, Muqtada al-Sadr, announced his withdrawal and his party from participating in the upcoming elections, as well as withdrawing his support from the current government. This came during a speech he delivered today.

Al-Sadr said, in his televised speech, “You have my love and my love, Iraq, the Iraq of my fathers and grandfathers, you have my soul and blood, the Iraq of glory and jihad. And they raised every agent in you, so that nothing remained in you but ruin, humiliation and humiliation, O my homeland, there is a calamity in you, but in you is a calamity and corruption, and it is no longer possible to erase or reduce it.”

He added: “Everyone colludes against you, so you benefit and harm you, and I do not want to be from them, nor with them, nor among them. God is obeyed, and when someone hurts you, he is disobeyed.”

Al-Sadr continued: “In order to preserve what is left of the homeland and to save the homeland that the corrupt have burned and are still burning, I announce that I will not participate in these elections, as the homeland is more important than all affiliations, and I announce that I withdraw my hand from all those belonging to this government and the following, and if they claim to belong to us, the Sadr family, everyone is either A minor, negligent, or boasts of corruption, and everyone is liable to account.”

He addressed the Iraqi people by saying: “Oh, the Iraqi people, today you are called to support Iraq against the corrupt, subordinationists and printmakers, and you should not sell your homeland to them at any price. The homeland is with heart and conscience, and we are not looking for a homeland because our homeland is alive and does not die, even if it is a prisoner of injustice and distress. The fate of Iraq will be the same as the fate of Syria, Afghanistan and other countries that have fallen victim to internal, regional and international policies.

Al-Sadr concluded by saying: “Brothers, I am not one who shirks responsibility, but what is happening in Iraq and within an international satanic scheme to humiliate, kneel and burn the people for fear of the arrival of reform lovers who will remove corruption for the love of the country, but we are not kneeling, we kneel to God, so let them take all positions and chairs. And let them leave our homeland, and we wish these elections success and the arrival of all the righteous, and that the corrupt will be removed.”