Floating the currency and rentierism confuse the Iraqi economy

Floating the currency and rentierism confuse the Iraqi economy 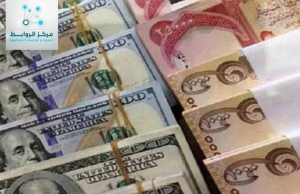 The Central Bank of Iraq’s goal of devaluing the currency last December, the exchange rate of the local currency (the dinar) against the dollar by 24%, was a better management of payments and the economic crisis experienced by the country, and the decision to devalue the Iraqi dinar at the end of 2020, stirred up Some fears that this decline in value is a prelude to a full float of the local currency.
The dollar exchange rate reached 1470 dinars to the public, and 1460 dinars to banks operating in the country, compared to 1182 dinars before the reduction.
This reduction enabled the Al-Kazemi government to overcome a major crisis that Iraq could have faced, as the government was able, through this reduction, to provide salaries, run state affairs, and reduce the money smuggled abroad, as the dinar became a weak economic margin for smugglers.
Some economists believe that the flotation policy is of no real benefit in the Iraqi economy, as the Iraqi economy is a rentier economy that depends heavily on oil revenues, and that the full flotation will have negative repercussions on the purchasing power of the Iraqi consumer, especially the middle and poor groups.
The policy of full flotation requires diversification of the economy to create a state of balance in supply and demand, but this is difficult in Iraq because there is only one player in this equation, which is the Central Bank of Iraq.
The recent devaluation of the dinar led to a rise in the level of inflation to 4 percent due to the reflection of exchange rate differences and import costs on the final consumer.
The annual inflation rate in December 2020 rose by 3.2 percent on an annual basis, affected by the change in the dollar exchange rate.
The Iraqi economy suffers from a contraction of 11 percent in 2020, which exacerbated the economic weaknesses that it has been experiencing for a long time. Services, among the most significant risks to the country’s long-term growth.
The factors of low prices and the spread of the epidemic, along with the ongoing political instability in the country, have led to the inflation of the Iraqi budget deficit to 15.6% of GDP in 2020, and a sharp decline in its official reserves.
According to the International Monetary Fund, expectations issued by the United Nations showed a decrease in Iraq’s gross domestic product by 10 percent this year, driven by the negative consequences of the outbreak of the Corona pandemic and the crisis of falling oil prices.
The fiscal deficit is reaching an unprecedented level of nearly 30 percent of GDP this year, and the United Nations Development Program recommended expanding the coverage of social security for vulnerable groups in Iraq, increasing revenue generation to finance major government programs, and allocating more resources to developing the private sector. .

There are challenges that the Iraqi economy is experiencing, such as reforming the development of the management of state resources, corruption, poor planning, unclear investments, the absence of the role of the private sector, and many obstacles.
The country’s public finances were affected by the duality of the drop in oil prices to the lowest level in two decades, earlier this year, to an average of $ 15 a barrel, before rising later to an average of $ 40, and the country was also affected by the decline in the quantities of oil exports, with its commitment to the “OPEC” agreement. +” to reduce production, which requires members to cut 9.7 million barrels as of last May, before reducing the reduction to 7.7 million barrels from last August until the end of 2020.
The reality of financial and administrative corruption suffers from the difficulty of implementing full flotation and achieving its goals, which leads It leads to failure, and even further deepening of the crisis economic scene.
The flotation is supposed to lead to stimulating the domestic product and reducing dependence on imports, and the flotation of the currency affects the value of the local currency, whether it rises or falls, which affects prices, foreign trade, and economic growth in general, if the flotation system is imposed and protected by the authority of law and the state. .

The impact of flotation from an economic perspective on the advanced industrial countries is different from that of the developing countries.
In the case of floating a currency towards a rise in its exchange rate:
If the floating of one of the currencies causes a rise in the exchange rate of this currency against the rest of the currencies, meaning a rise in its parity rate with foreign currencies, this would have a negative impact on the movement of exports, due to the high prices for foreign importers. Which in turn leads to a decrease in demand for it.
This results in an increase in imports as a result of lower commodity prices for local importers, and consequently, a trade balance deficit occurs.
Which may lead to stimulating local capital to turn to foreign investment due to the opportunity to replace the local currency unit with a larger number of foreign currency units, which would have a negative impact on the state’s payments.
The local industry is also affected as a result of its entry into a competitive field with imports, which increases with the relative decline of foreign goods for local importers, which in turn causes a slowdown in economic growth and a decline in the production process, and the decline in the production process leads to an increase in unemployment, which upsets the trade balance.
In the case of floating the currency in the direction of a decrease in its exchange rate:
Floating the currency leads to a decrease in its exchange rate, or the so-called decrease in its equivalent price, which leads to the opposite of the aforementioned economic effects of raising the price of the currency.

All of this requires careful planning and the rule of law in Iraq, being a developing country, and facing difficult challenges in light of a fragile economic situation and an unstable political situation, which must be above everyone, “but the corrupt gangs will confront this mechanism by raising the prices of local goods.”
In conclusion, Iraq is not a poor country, as it is the fourth largest oil-producing country; It has great economic and human capabilities, and a large market. However, Iraq suffers from primarily political, administrative and economic structural problems. Including the excessive dependence on the oil sector, which constitutes 95% of its exports and 90% of budget revenues, as well as about 60% of the real economy, and therefore any fluctuation in oil prices and their decline leads to financial obstacles and real deterioration and an obstacle to economic development, and Iraq He can draw up a successful economic policy, but there are parties that do not want reforms, as they live off the disruption of the Iraqi economy.