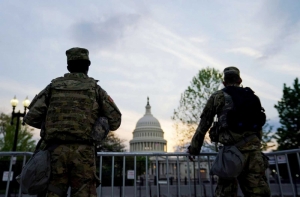 WASHINGTON – 124 retired generals have cried to “save America” ​​due to President Joe Biden’s negligence in dealing with internal chaos, especially the openness to Iran and the incalculable decision to withdraw from Afghanistan.

The US demand comes days after hundreds of French military personnel, including twenty generals, signed a letter to President Emmanuel Macron, warning of the disintegration of the state due to the rise of Islamism and hate speech, which could lead to a civil war.

The interference of the military in political affairs is rare in the West, which makes the coincidence of the two messages a serious warning that the negative behavior of Western countries with the emergence of culturally and religiously dissonant groups may threaten to blow up the state from within, and that the signatories of this message move in order to draw attention and pressure to return matters to Set straight.

The military warns that the exaggerated liberal calls lead to the acceptance of diversity such as the black movements, the recognition of Islamism, and the opening of the door to the flow of refugees into a state of chaos that threatens the principles on which the American or French state was founded, and that those who arrived after the start of their train must adapt to these principles The principles do not change to embrace these variations.

The message of the American military, who called themselves “Officers of the Flag for America,” recalled what their French counterparts said.

Senior US military said, “Our nation is in deep danger. We are in a struggle for our survival as a constitutional republic, ”and“ the survival of our nation and our historical values ​​is at stake, ”warning against the infiltration of the left, Islamists and anarchists into society in exchange for the silence of the Biden administration.

“Retired generals and admirals do not usually interfere in political matters, but the situation we face today is dangerous and if we remain silent, we will be as neglecting their duty towards the country,” Major General Joe Arbuckle, who is behind the message, told Politico.

General Joe Arbuckle: Our silence shows us as neglecting their duty to the country

Observers believe that the message carries a broader dimension than the generals ’anger at the” dictatorship of democrats “and that it conceals a state of widespread concern among Americans about the inability of successive governments, including the government of former President Donald Trump, to implement measures that limit the external threat inside the United States.

Despite the Trump administration’s hostility to Islamism, his threats to confront it on American soil remained dead letters. Biden’s rise gives an opportunity for various groups of Islamists to move with great freedom and activate their foreign relations without fear, especially after their participation in his election campaign.

The Americans are looking with concern at the expansion of the activities of the foreign lobbies that have succeeded in penetrating American institutions, especially Congress, and now controlling the foreign policy of their country. Including the success of the pro-Iran lobby, which pushes the Biden administration to repeat the mistake of former Democratic President Barack Obama.

Whatever the calculations of Biden from re-working the nuclear agreement with Iran, he provides a free service to the Iranians who master maneuver and gain time, to cut steps that cannot be undone or prevent them from joining the club of nuclear states. The Americans view with great sensitivity the issue of Iran, which has been defying them since the 1979 revolution and the subsequent detention of Americans, up to the threat of the American presence in Iraq and the interests of the United States in the Gulf.

Observers believe that Biden’s permission for Iran to establish its influence in the region may strengthen the tendency of the generals to enter the political work, especially since this White House strategy dissipates the gains made by the military establishment in Iraq and Afghanistan.

And for the sake of the adventure of an incalculable withdrawal in Afghanistan, the military’s message questioned Biden’s mental powers and his competence, and said that “the mental and physical condition of the Commander in Chief of the US Armed Forces cannot be ignored … he must be able and quickly to make the right decisions regarding national security throughout the day. .

It is believed that the message of the top military leaders in the United States will find interaction from various American parties, especially youth groups, in light of the success of the chaos of diversity in covering up the Native American identity, which was expressed by the protests of Trump supporters during the attack on the Capitol building and the slogans raised at the time.

Despite the politicians ’rejection of the military’s interference in politics, the message of the senior French military has found a great interaction within the French society affected by extremism and hatred that is controlling new generations of immigrants’ children under the influence of political Islam groups that benefit from the indulgence of French values ​​to implement their agendas.