Iraq in the square of American attention: oil, investments, and the Iranian dimension

Iraq in the square of American attention: oil, investments, and the Iranian dimension 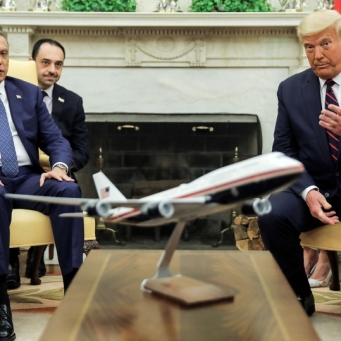 The visit of Iraqi Prime Minister Mustafa Al-Kazemi to the United States and his meeting, Thursday, with US President Donald Trump showed that Iraq has returned to square one in the relationship with Washington, and that oil, energy, investments and the strategic Iranian dimension are the focus of this relationship, which the Trump administration has succeeded in controlling.

The economic dimension of the visit grabbed attention after the Iraqi Oil Minister Ihsan Abdul Jabbar revealed that the Ministry of Oil had signed agreements with solid American companies worth billions of dollars to develop infrastructure in the refinery and gas sectors and to establish a new energy company in Dhi Qar Governorate.

However, the political dimension, especially what is related to the power struggle with Iran, was a pivotal element in the statements of the American president, who said that his country has a limited number of soldiers in Iraq and that the goal is “to help if Iran does anything,” in a clear reference to the administration Trump sets as a priority to break Iranian influence, a factor in which George Bush Jr. and Barack Obama failed. Trump informed the Iraqi Prime Minister of his commitment to the rapid exit of the international coalition forces from Iraq within three years, according to the official Iraqi News Agency.

The agency quoted Trump as saying, during the meeting, “We withdrew largely from Iraq and very few soldiers remained.”

He affirmed his commitment to “a speedy exit of the coalition forces within three years,” adding, “Al-Kazemi is a man who I get along very well with.”

Before leaving for the United States, Al-Kazemi received over the weekend, Ismail Qaani, the commander of the Quds Force in the Iranian Revolutionary Guard, amid leaks about his refusal to transmit any messages from the Iranian leadership to Trump.

Within a few hours, between the moment he arrived in the United States on Tuesday evening and the date of his meeting with President Trump yesterday evening, Al-Kazemi held a series of meetings in Washington that included a meeting with Secretary of State Mike Pompeo, President of the International Monetary Fund, Kristalina Georgina, and members of the Businessmen Forum and the American Chamber of Commerce.

The sources accompanying Al-Kazemi on his visit to Washington told Al-Arab that the initial understandings between the Iraqi delegation and the American side regarding the energy sector were very promising, confirming the signing of contracts in the fields of electricity and gas with major American companies in amounts exceeding four billion dollars.

In his meeting with Pompeo, Al-Kazemi discussed “the most important files of common interest, and ways to develop relations between Iraq and the United States at various levels and fields.”

After the meeting, the US Secretary of State announced that “armed groups are still causing many problems in Iraq,” expressing his hope that “Iraq will be free of corruption.”

“We are committed to helping Iraq prevent foreign interference and improve relations with neighbors, and this is what the Iraqi people want … a prosperous country,” he added.

He continued, “There are private investments in Iraq .. We wish an Iraq free of corruption,” noting that “the energy file was discussed with the Iraqi delegation.”

Pompeo affirmed “Washington’s support for the upcoming elections in Iraq,” noting that “Iraq and its country share goals, sacrifices, a vision and hope for the future. These principles lead to a stable and fruitful partnership.”

Al-Kazemi discussed in his meeting with the President of the International Monetary Fund, “concluding an agreement to support the Iraqi economy and reduce its dependence on oil, by rehabilitating other sectors and making them compete with the oil sector in a way that can absorb unemployment in the country.”

During his meeting with a number of members of the Businessmen Forum and the American Chamber of Commerce, in the presence of Energy Minister Dan Broelt, Al-Kazemi referred to “the importance of sustainable strategic cooperation with the United States, and with American companies and banks, and stressed the government’s readiness to remove all obstacles to the work of American companies in Iraq.”

He stressed that “investment opportunities are available to American businessmen and companies,” while calling on American banks to “cooperate in the development of the Iraqi banking system, to keep pace with international banks as the basis for a major economic openness.”

Observers say that Al-Kazemi’s openness to economic cooperation with the United States in this overt and direct manner intersects with the aspirations of the pro-Iranian Iraqi militia leaders, who do not prefer Baghdad to deal economically with strong countries capable of protecting their interests.

The bilateral committees between the two countries were no less direct in their public endeavor to develop the partnership between Iraq and the United States.

The two sides agreed to “separate technical talks to manage the times and move to the new stage, including any redeployments outside Iraq linked to it.”

However, the news coming from the American capital did not appeal to some Iraqi parties, especially the militias affiliated with Iran and its political arms, which see the close relations between Baghdad and Washington as the most serious threat to their plans to swallow up the state.

Although the protocol reception of leaders, commanders and presidents at airports became extinct some time ago, the Asa’ib Ahl al-Haq militia led by Qais Khazali, who is described as one of the Iraqis most loyal to Iran, found nothing but the way Al-Kazemi received it in Washington as evidence of the visit’s failure.

The deputy for the political arm of the Asa’ib militia, Abdul Amir Al-Taiban, said, “The way the Iraqi Prime Minister Mustafa Al-Kazemi was received by the Americans in this humiliating way reflects firstly the American arrogance and arrogance towards others, and secondly, it gives, at first glance, the failure of that visit.”

Although Al-Kazemi’s reception procedures were completed in full, and he was transferred through a large column of diplomatic wheels to his temporary residence, Al-Taibin believes that “dealing in such a manner is dealing with the defeated, the strong with the weak and the arrogant with the servile.”

Observers say that this angry tone, which is not based on objective estimates or diplomatic experience, translates into the great emotion that afflicts Iran’s followers in Iraq, and their fear that the visit to Washington will strengthen Al-Kazemi’s support and make him very popular.