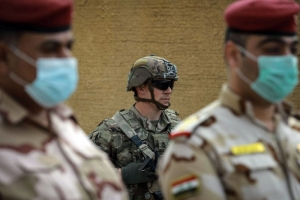 The United States feels that it is in a position of strength in the struggle it is waging against Iran in Iraq, and that its tactics to disperse the Iranian effort on several political, economic and security fronts work well and limit the ability of Tehran and its allies to confront it. This confidence translates into Washington’s insistence to keep its forces in Iraq within an agreed formula with Baghdad.

WASHINGTON – The United States of America reaffirmed its intention to keep its forces in Iraq, blocking the path to political forces and Shiite factions close to Iran, which had earlier enacted parliamentary legislation calling on the Baghdad government to remove those forces, and is still pressing to discuss its implementation during the Iraqi-American strategic dialogue That started last June and will continue in the coming months.

General Kenneth McKenzie, commander of US forces in the Middle East, pointed to the possibility of reducing the number of American soldiers present on Iraqi soil in consultation with Baghdad and in the framework of the ongoing dialogue with it, but he in return confirmed Washington’s intention not to abandon its role in confronting ISIS in Iraq and building Iraqi military capabilities.

“We can get the job done with fewer American forces in Iraq and it will be reduced in consultation with everyone,” he told Voice of America channel.

“The Iraqi government recognizes the benefit that the United States, coalition, and NATO forces are achieving in fighting against ISIS,” added McKinsey, who estimated the number of US forces currently in Iraq at between 5,000 and 6,000. , Referring to the strategic dialogue.

For its part, the American Al-Hurra channel reported on its website that a US defense official revealed plans for a possible reduction of US forces in Iraq.

This confirms what the newspaper “Al-Arab” had published earlier about the work of President Donald Trump’s administration on establishing a US military presence on Iraq, long-term, but it is numerically limited and safe. Passing through Iraqi territory .. And at the same time, he does not neglect the concern to avoid human casualties among the American forces during the presidential election year, as Trump knows how sensitive this factor is to the American voter.

The United States is fully aware of Iran’s presence in the background of inciting the removal of American forces from Iraq, not only by pressure by its Iraqi political allies, but also by using its militias there to disturb the comfort of the American and even diplomatic presence on Iraqi soil by targeting the US embassy in Baghdad and some locations where there are American soldiers.

The American general clearly indicated the Iranian role, saying that Washington’s continuing to help Iraq in its war against ISIS is a setback for Iran, stressing that Tehran is trying hard to get the United States out of the Iraqi theater, and that it is now aware that it will not be able to get our forces out of politics, and that is why it is trying to do so. By force through its militia, but the degree of its control over those militias has declined dramatically after the killing of Qassem Soleimani, the commander of the Quds Force, which was claimed by an American air raid near Baghdad airport earlier this year in which his Iraqi companion, Abu Mahdi al-Muhandis, who was deputy head of the PMF, was also killed. .

In recent days, a new type of targeting of the American presence in Iraq has emerged, namely, exposure of convoys to supply American forces with supplies, as announced by the armed groups carrying out these operations. It is believed that these groups are the same Iraqi Shiite militias that raise the banner of “resisting” the US military presence in Iraq, even if they begin to hide under unknown names previously, in an attempt to avoid an American response that can be painful and does not exclude the leaders of those militias.

A group calling itself “Cave Companions” claimed the destruction of a US Army logistics support convoy in the Machkheifa area of ​​Salah al-Din Governorate.

In a statement, the group stated that it confirms “the destruction of a large logistical support convoy with its affiliates from foreign security protections, in Salah al-Din, and in the area of ​​Machishafa in particular.”

The incident came the day after unidentified gunmen announced that they had targeted three trucks that they said were carrying logistical equipment for the American forces between the provinces of Al-Muthanna and Diwaniyah, southern Iraq.

And the commander of the American forces considered that “the Iranians dream in Iraq reached a dead end with the presence of a new Iraqi government that is not fully loyal to them and makes decisions that serve the interests of its country.”

Mackenzie described the government of Iraqi Prime Minister Mustafa Al-Kazemi as “very offensive and very beneficial” in her attempts to limit the attacks by Iranian-backed militias on Iraqi bases that include American forces, saying that Al-Kazemi takes his responsibility seriously to fight these militias and protect coalition forces That helps him, saying “That is why we have seen fewer attacks on American bases,” in Iraq.

The current Iraqi Prime Minister, Mustafa Al-Kazemi, shows a difference from his predecessors who preceded him at the head of the government in the post-Baath Party regime. At least he is not affiliated with the pro-Iranian camp, and he seems more willing to curtail the militias loyal to them and control their weapons despite the difficulty of that mission at the time. Present.

Jamestown researcher Jacob Lace Weiss said that the Iraqi prime minister, who is fighting a militia influence outside the state’s authority, is facing a difficult task at present.

He explained in an analytical article about the situation in Iraq that Al-Kazemi cannot currently press heavily on the pro-Iranian factions in order not to risk a confrontation that might destabilize the country’s security and political stability, and at the same time he does not want to tolerate it until “does not alienate a great ally” he The United States, which needs its help amid the difficult financial crisis that Iraq is going through.