The 2020 budget will arrive in parliament in two weeks .. This is the most prominent thing it contains

The 2020 budget will arrive in parliament in two weeks .. This is the most prominent thing it contains 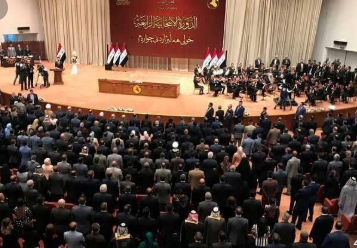 Baghdad – Mawazine News,
The Parliamentary Finance Committee suggested, on Tuesday, the arrival of the 2020 budget in parliament after two weeks, noting that the most prominent thing in the draft budget is the addition of financial allocations to re-terminate their contracts in the popular crowd.
Committee member Hanin Qaddo said, “The country’s draft federal budget law for 2020 will arrive in the parliament two weeks after the formation of the government of Prime Minister-designate Muhammad Tawfiq Allawi,” noting that “the deficit in the budget law can be addressed by high oil prices.”
And that “the resigned prime minister, Adel Abdul Mahdi, should have sent the budget before submitting his resignation, so that we do not fall into the pain of the delay, which has seriously disrupted the projects.”
He added that “Allawi has programs and priorities that differ from the directions of the caretaker government, not to mention the existence of many notes on the draft law,” noting that “the ministries of finance and planning will set the broad lines of the budget before sending it to parliament for a vote.”
And he added, “This year’s budget will contain special financial allocations for emergencies and to face the threat of the Corona virus,” explaining that it “will focus on slow projects.”
Al-Kiddu denied, “There is a deficiency in covering the salaries of employees, but the government may need to borrow internally from expenses and shares.”
A member of the Finance Committee warned that failure to vote on the new government will negatively affect the economic and financial situation, especially the budget, as it will be dealt with according to the principle of 1/12 as it happened in the year 2014. Ended / 29 / p