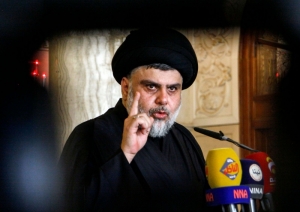 BAGHDAD – Shiite cleric Moqtada al-Sadr is leading an organized campaign to oust the leader of a coalition of state law, Nuri al-Maliki, who served as prime minister for two consecutive terms between 2006 and 2014 in state facilities.

Sadr’s keenness that Maliki’s coalition will not get any ministry in the government of Prime Minister Adel Abdul-Mahdi until now, despite achieving 25 parliamentary seats during the general elections in May.

Observers say that the leader of the Sadrist movement is in a position to dismantle the influence of his arch-rival Maliki, especially as the Dawa Party is no longer in the forefront, has lost its influence on the government because of the conflict between the wings; the first represented by Maliki, and the second led by former Prime Minister Haider Abadi.

On Wednesday, Sadr’s political team succeeded in ousting Maliki’s governor from Baghdad and installing a pro-Sadr governor. Sadr is also depriving Maliki’s coalition of the governor of Basra, Iraq’s economic capital, where the conflict is raging.

Political sources told the “Arabs” that “Sadr told his ally in the reform alliance, Ammar al-Hakim, that he is ready to support any candidate proposed for the post of governor of Basra.”

The current governor of Basra, Asaad al-Eidani, one of the candidates of the list of former Prime Minister Haider Abadi during the May elections, but broke away after winning a parliamentary seat and joined the alliance building close to Iran, which includes Maliki’s coalition and the Badr Organization led by Hadi al-Amiri and Asaab Ahl al-Haq led by Qais Khazali.

Hakim strongly supported the delivery of Sadr’s candidate to the post of governor of Baghdad, after Maliki’s coalition tried to block the vote on Wednesday.

The sources said that al-Sadr stipulated that Abdul-Mahdi, in support of the post of prime minister, to implement some demands for full waiver of the maturity of the Sadrist bloc in his ministerial cabinet, and to give him the freedom to choose ministers, including the removal of a number of officers loyal to the owners of sensitive positions in the Ministries of Defense and Interior. This decision was indeed one of the first actions carried out by the Prime Minister after taking office.

Although he stepped down as prime minister more than four years ago, Maliki’s influence remains strong in some Iraqi state institutions.

Maliki’s career has seen the installation of thousands of employees loyal to him in high and intermediate grades in various ministries, institutions and government departments. The term “deep state” is commonly used in political circles, referring to members of the Dawa party who support Maliki, who control the pillars of the government and its vital joints, even after stepping down.

Sadr is pressing Abdul Mahdi to liquidate this influence in one of his most prominent demands in forming a government.

Leaders of Sadr’s reformist alliance warn that the “deep state” loyal to al-Maliki could thwart Abdul Mahdi’s government as it tried with the Abbadi government and succeeded in some of the joints.

Maliki is no longer at the political level, Iran’s most important ally in Iraq, after the brightness of the star Hadi al-Amiri, led by the Fatah Alliance, the second Shiite political force, after the Sadrist bloc, in the Iraqi parliament.

Observers say that “Maliki, will not enjoy the level of Iranian support, which was obtained previously, in the presence of other Iraqi parties, can meet the Iranian desires in Iraq.”

Observers do not rule out that this campaign to eliminate the influence of al-Maliki is the introduction of political exclusion and may be referred to the judiciary.

Among the actions that Maliki may worry a lot, and dragged him to justice, the Iraqi parliament approved the formation of a committee to investigate the events of the fall of the city of Mosul in 2014.

Political circles speculate that this committee may lead to the conviction of al-Maliki, who was prime minister that year, and issued strange orders to withdraw military units in front of the advance elements of an organization calling for the city of Mosul, the summer of 2014.

Iraqi politicians say the appointment of Osama al-Nujaifi, a veteran politician from Mosul and stubborn opponent of al-Maliki, to head this investigative committee was “no accident.”