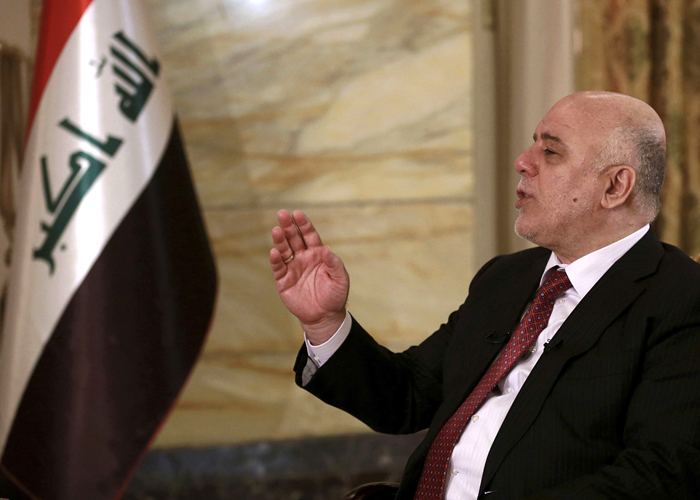 BAGHDAD – Iraqi Prime Minister Haidar al-Abadi will launch a campaign against “senior corruptists” as a front for a new phase in Iraq after the overthrow of an al-Qaeda organization aimed at curbing Iranian influence inside Iraq, Iraqi political sources said.

According to sources close to Abadi, “the prime minister intends to move towards the siege of the interests of Shiite political figures in Baghdad pro-Iran on the basis of an international decision.”

Abadi said that “the next phase in Iraq will witness a war on corruption and corrupt.” “Just as a terrorist would have the option to surrender or die, the corrupt will choose between handing over what they have been deprived of, or spending the rest of their lives in prison,” he said.

“We will enter a battle with corruption and we will win it. We will surprise the corrupt, and they will be surprised by what we will do. ”

The Iraqi political analyst, confident Hashemi, that “Abadi began to open the file of corruption after the completion of the files of the fight against the crisis and the Kurdistan region and Iraq’s foreign relations,” adding that the campaign will be long “big names of the political class or businessmen who represent the economic fronts of parties and personalities Political. ”

Hashemi said that “an international investigative team contributed to the detection and documentation of many files of corruption” in Iraq, and handed the results of his work to the Iraqi government.

Shiite political sources in Baghdad say the team surrounding former prime minister Nouri al-Maliki, Iraq’s most prominent ally, “feels he is the target of this campaign.”

Maliki is accused of wasting large sums of money during eight long years of power in Iraq, and his second term saw the fall of large parts of the country in the hands of a hardliner.

Maliki gave pro-Iranian Iraqi militia leaders privileges in projects that generate millions of dollars to help recruit thousands of young people between 2012 and 2014, known as the “Islamic Resistance” project, many of whom traveled to Syria to fight under the leadership of the Revolutionary Guard Iran, along with the army of the regime of President Bashar al-Assad.

In a rare move, al-Maliki’s Dawa Party, one of his most prominent leaders, was ousted after being accused of corruption. The party announced that it had investigated the former governor of Baghdad, a prominent member of the da’wa, Salah Abdul Razzaq, and then dismissed him after being found guilty of corruption.

Observers say that “Maliki may have allowed this step within the party, coinciding with the declaration of Abadi on his campaign to fight corruption, to avoid appearing as the protector of the corrupt.”

Activists in Facebook circulated lists of prominent Iraqi figures, whom Abadi’s campaign was said to target. Observers noted that most of the Shiite figures on this list close to Maliki.

No official authority in Baghdad has commented on these lists, but Maliki’s supporters say they are counterfeit and fall within the framework of Shi’ite political rivalry.

According to high political sources of the “Arabs”, “Abadi comply with an international resolution, behind which the major powers, and aims to besiege Iranian influence in Iraq.”

According to these sources, “Iran’s allies in Iraq, used the country to clean up funds belonging to the Iranian Revolutionary Guards and Lebanese Hezbollah, and they received during the second term of the Maliki’s large facilities, helped them to acquire large Iraqi funds, under the banner of the establishment of investment projects.”

The sources say that “the bulk of Abadi’s plan to combat corruption, is based on drying up the sources of money associated with Iran in Iraq.”

But political circles in Baghdad, believes the difficulty of adopting Abadi campaign to confront the big figures, like Maliki.

The political circles talk about “the immunity enjoyed by Maliki and his allies, in Iraq because of their public relations with Iran.”

Observers say that “Abadi may open the doors of hell, if he decides to clash with the owners.”

Therefore, they believe that Abadi ‘s campaign of corruption may be limited to pursuing second – class figures involved in executive corruption such as conservatives, ministers who do not belong to powerful political blocs, and central administrations in government institutions.

The Arabs of London