Kurdish source: Nuri al-Maliki is allowed to peshmerga to extend for a share of oil smuggler

Kurdish source: Nuri al-Maliki is allowed to peshmerga to extend for a share of oil smuggler 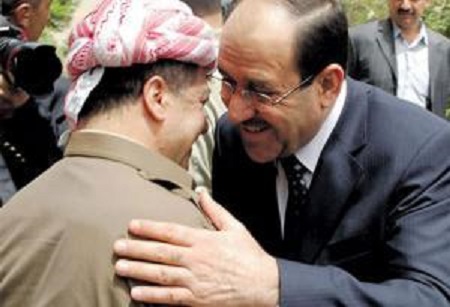 Revealed a leader in the Kurdish National Union Party about a deal was the former Prime Minister Nuri al-Maliki had held with the President of the Kurdistan region Massoud Barzani, while planning for a second term in 2010

The Kurdish leader said that a secret agreement signed between Maliki and Barzani stipulates that Maliki get a percentage of Kurdish oil smuggled, and be a partner with the Barzani family in the proceeds of oil smuggling, either from Kirkuk or the region in exchange for allowing the expansion of the Peshmerga in the disputed areas, and that gave a pledge Barzani has joined Kirkuk in Kurdistan and turned a blind eye to the impoverishment of the main neighborhoods of the oil-rich city.

The source pointed to the leaks of a private dialogue between Barzani and Maliki in 2010, in which the latter said that the western region of Iraq does not mean much, and is sure that Anbar, Nineveh, Diyala and Kirkuk will not be under the control of Baghdad, and is ready to give up those areas, To choose any area to be included in Kurdistan in exchange for the Kurds support Maliki in keeping him at the head of the executive authority in Iraq,

A leader in the National Alliance said that Maliki is in a state of hysteria because of political gains achieved by Abadi, and that he was disappointed with any victory in the upcoming elections due to the broad popularity of Abadi as a result of his skill in dealing with the referendum crisis and his success in restoring the disputed areas, Without armed clashes with the Peshmerga.

The source, who preferred to keep his name to avoid embarrassment, that Maliki continues contacts with Iranian leaders in search of an opportunity to restore some of the presence in the Iraqi Shiite circles, seeking the leader of the Islamic Revolution in Iran, Ayatollah Ali Khamenei and his adviser Qassem Soleimani support in the upcoming elections, The existence of an international conspiracy to postpone the elections and keep Abbadi two more years in office.

The source said Maliki asked Kassim Soleimani if ​​Iran would continue to support Abadi and provide a basket of gains to the Iraqi prime minister to ensure his political future? How is Iran’s support for Abadi balanced with Turkish and American support? Sulaimani replied: “Ebadi managed the crisis with the mentality of the state man and achieved a rare state of balance between all parties, and he deserves all of their support.”