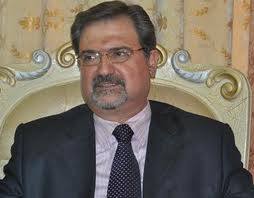 The Turkmen MP Jassem Mohammad Jaafar al-Bayati, Tuesday, what is circulating about the intention of the President of the Kurdistan region Massoud Barzani, “intransigent and dictator” to resign as “ridiculous,” and expressed surprise at the “more than 600 thousand Kurds” to leave the province, Kurdish “withdrawing” some houses and shops.

Jaafar said in an interview that “what is being circulated about the writing of Massoud Barzani for his resignation is ridiculous because it is unlikely that someone who is intransigent and dictator to proceed with such a step,

Stressing that “Barzani if ​​he wanted to resign, he must submit his resignation to those who chose him and we do not know who chose him, but we believe that his fate will be like the fate of the former regime president Saddam Hussein.”

Jaafar added that “the separation and declaration of independence of the province under the state of psychological defeat experienced by Barzani now is impossible, especially under the circumstances of the current he is unable to control his home or palace how can control the three provinces,” noting that “the situation is very severe We are currently in Kirkuk and we have found that more than 600 thousand Kurdish citizens have left their homes and fled to the Kurdistan region. ”

Jafar said that “the escape of the citizens of the Kurds is very surprising, there is no threat to them and what happened was just the imposition of the sovereignty of a state on a state-owned province, even when the factions urged when entering the areas of Iraq, the poor and simple citizen remained at home and was not with or The government, “pointing out that” Barzani’s media machine portrayed the security forces in a grotesque way of trying to turn it into a sectarian and component conflict as if it were a revenge against the truth. ”

The Turkmen MP said that “it made the issue difficult for the security forces because they are obliged today to protect the homes of these families, which are very many houses, and half of the forces put to separate the regions and we fear of reprisals by burning houses in response to the burning of houses of some citizens earlier,

Stressing that “all the Kurdish families who believe in peaceful coexistence and the construction of the one unified homeland, return to their homes and exercise their work as a brotherhood to rebuild the city.”

Jaafar stressed that “there are no conflicts between the components and we believe in partnership and those who believe in the doors of the province is open to them, and not dragged behind poisonous ideas are trying to intimidate them from their brothers Arabs and Turkmen,” pointing out that “some houses and shops that were burned deliberately by The Kurdish forces withdrawing to the horror of all that the Iraqi forces are burning. ”

At the dawn of Monday (November 16, 2017), al-Abbadi directed security forces to impose security in the province of Kirkuk, while the commander of security operations in Kirkuk confirmed the imposition of security on the entire city of Kirkuk and its government institutions.