Shiite Maliki thwart a bid for prime minister in Iraq

Shiite Maliki thwart a bid for prime minister in Iraq 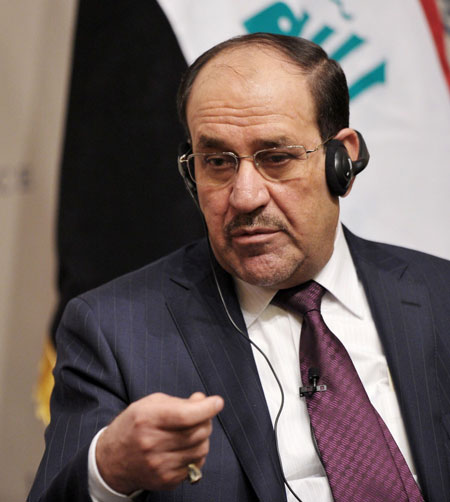 BAGHDAD – A rejection of all of the Shiite cleric in Iraq, Ali al-Sistani and cleric Moqtada al-Sadr, the reception of a coalition of law Nuri al-Maliki on Saturday in their offices in Najaf, visited to attend a tribal conference on community reconciliation.
He described the Iraqi Followers The reference position as a message to the owners lined his desire to return to the prime minister fail. Also reveals the expansion of the circle other than al-Maliki with al-Sadr and the impossibility to bet on the Sadrists in his quest.
Sources close to al-Sadr revealed that the young Shiite cleric rejected on Saturday, Maliki’s reception area at its headquarters Alhananp in Najaf, shortly after the issuance of a similar position of the supreme religious authority of the Shiite community in Iraq.
Official in Maliki’s office denied this information and informed the “Arab” that the leader of a coalition of state law did not ask for any of the clerics.
It is not the first time during which Maliki fails to hold a meeting with Sistani, who leaked news of his unofficial boycott of all the country’s politicians after the previous government’s failure to files that fall under its responsibility, as well as rampant financial corruption in most of the state apparatus.
The position of Najaf, a major political blow to the owners of the aspirant to return to the post of prime minister after two consecutive spell it, and behind the sensation is still going on the way in which he conducted the country’s sharp political conflicts fought with its Sunnis and Kurds.
Over the past two months leak political circles close to al-Maliki news about changing the reference position of the former prime minister.
Says close to political figures from al-Maliki that the reference Najaf abandoned its reservation to the former prime minister, and they consider him as able to compete politically legitimate.
But refused to receive him in Najaf probably is a practical response from the reference to these allegations, according to observers.
Maliki visited Najaf on Saturday morning, accompanied by the President and the Parliament and a crowd of MPs, ministers and local officials, and participated in the “National Forum for national reconciliation,” which was sponsored by the Emirate of Bani Hassan in the Alhaidariya area.
Najaf represented a crucial reference reason to dispel the hopes of Maliki in obtaining third term after his partner supported the Dawa Party, Haider Abadi, in the wake of the 2014 elections.
He said local observers that al-Maliki is no longer an option when in Iraq, Shiite leaders because of the many charges against him for causing the invasion Daesh of an important aspect of the territory of Iraq, as well as government experience, which lasted for eight years of corruption and its inability to Iraq’s reconstruction and flood the country in economic and social crises link .
An Iraqi observer for “Arab” Maliki is currently working to restore the confidence of Iran through playing on fears of US strong Iraq return.
He did not rule to press Iran’s ruling Shiite alliance to accept the return of the former prime minister to government interface, especially that Iraqi Vice President, and follow up the details of government work through ministers of the Dawa Party, as well as the continuing influence in the sovereign ministries sunk by his followers, such as the Ministries of Defense and Interior.
He warned the observer that al-Maliki is able to return from the gate of sectarianism tendency which dominates the Iraqi leadership, referring to the statements of the leader of “League of the Righteous,” Qais al-Khazali and preached where the “Badr Shiite” (not only a Shiite crescent) prevail in the region and allows Iran to put her hand Iraq, Syria and Lebanon.
He criticized the Iraqi Vice President Osama Najafi Khazali’s remarks, saying that “mere fabrications (fabrications) irresponsible”, and that Iraq will not be subject to “external agenda, (and that) Shiite crescent Shiite Badr are rejected us completely.”