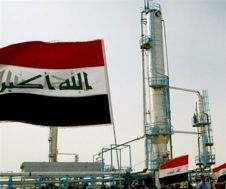 [Oan- Baghdad]
Minister of Petroleum and Mineral Resources , Tariq al- Mulla said that Egypt will receive the first Iraqi oil shipments estimated two million barrels of crude oil on 12 this May, pointing out that the completion of the mobilization of Egyptian trucks port of Basra, and began to move to Egyptian ports.
It signed the Egyptian General Petroleum Corporation and its negotiations with the Iraqi side two weeks ago to supply 12 million barrels of Basrah Light crude oil, by two million barrels every two months.
Al Mulla said in exclusive statements to the site “seventh day” the Egyptian, that this contract is a good start to cooperate with the Iraqi side in many areas during the coming period, especially the work of Egyptian oil companies Petrojet and ENPPI and Sun Egypt in the rehabilitation of Iraqi installations. ”
The minister continued, that Iraqi Egyptian agreement to import oil was not a substitute for Saudi Aramco shipments, but we get from the worlds suppliers, the government and the agreement allows a grace period before payment of dues shipments of up to 90 days. ”
Under the Egyptian contract with the Iraqi side on the supply of 12 million barrels per year of Basrah Light for renewable years, and the terms of payment of soft, plus it will be the Iraqi oil refineries in Egyptian refineries.