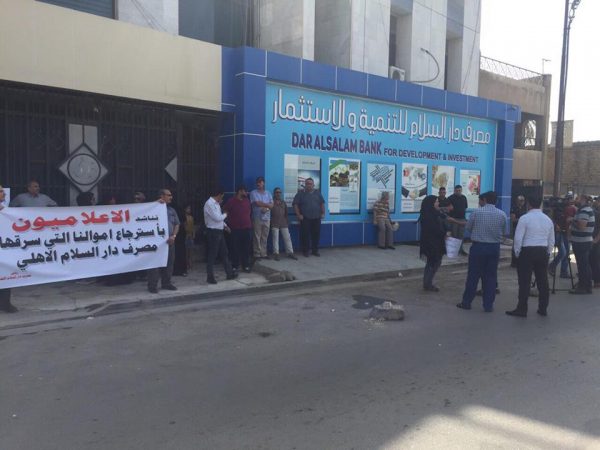 Protests financial deposit holders in a circle of private banks in the capital Baghdad, has widened, after suffering for bankruptcy and its inability to meet its financial deposits, under severe financial crisis experienced. And rallied hundreds of depositors, in front of the Iraqi Central Bank building in central Baghdad, Mtalpinh immediately intervene to launch financial deposits in Dar es Salaam Al Ahli Bank, after the last administration’s refusal to deliver them, according to Anatolia. Protesters held banners reading “We demand the central bank to intervene to launch our money seized by the Dar es Salaam for more than a year and a half.” Last Tuesday, dozens of depositors gathered outside Dar es Salaam Bank building, demanding the management of the Bank and the launch of their deposits. For his part, announced the “central”, Tuesday, preparing a plan to contain the problem of depositors in the bank, and secure the release of financial deposits. He said Majid picture, the governing body of a member of the central bank: “The Bank of Dar es Salaam is suffering from a liquidity crisis because of a dispute between shareholders in the bank, and the dispute has caused him to withdraw substantial funds and inability to repay customer deposits.” He added: “Central has solutions to contain the crisis and ensure the financial deposits of citizens,” adding that it “will intervene soon and decide to close the bank, and creates a bridge bank through which secure the deposits of citizens.” The “central” in 2012 put the custody of the Warka Ahli Bank, after being subjected to bankruptcy and inability to repay deposits of depositors. The central bank says only about 10 percent of Iraqis are using the banking system, despite the presence of more than 50 banks and a special government in Baghdad and the provinces, and experts attribute the decline in the proportion Financial depositors to banks for fear of exposure to the bankruptcy and the loss of their money.