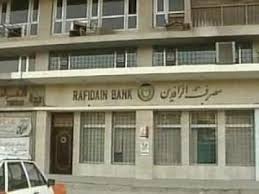 Announced the Office of the Inspector General of the Ministry of Finance, said on Sunday that the competent integrity issues, the court sentenced in absentia severe imprisonment for a term of two years against the financial adviser to Finance Minister former director general of the Bank of Iraq.

The office said in a press statement today, said that “the competent integrity issues, the court sentenced in absentia to imprisonment severe for two years the right financial adviser former Minister of Finance, Director General of the Bank of Iraq and called (z. h. q).

“He said the bureau” This came against the backdrop of the current in the Office of the Inspector General of the Ministry of Finance administrative investigations into irregularities Moumi him developments in the contract Rafidain Bank processing buy Kamrat control “, adding that” the purchase of these cameras have been manner per tender and not to resort to the style of tenders, as well as higher prices of materials compared to the market price.

“The annual report of Transparency International showed that Iraq, Sudan and Burma occupied the third place in terms of corruption in the world, with Somalia ranked first in the report, followed by Afghanistan, the report pointed out that countries experiencing internal conflicts in a state of corruption away from any control, and an increase in the looting of natural resources, and the lack of security and law, while it was confirmed the annual report of Transparency International in 2006 , Iraq, Haiti and Burma occupied the first rank among the most corrupt countries in the world