As a result of government corruption .. Japan offers Iraq a loan of 500 million yen!

As a result of government corruption .. Japan offers Iraq a loan of 500 million yen! 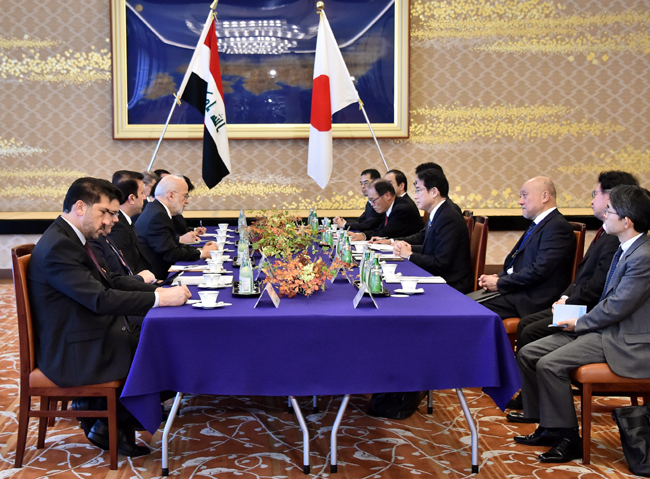 Japan has expressed its willingness to provide a loan of 500 million yen to help Iraq.

A statement by the Office of the Secretary of State on Wednesday, “The Foreign Minister Ibrahim al-Jaafari met with his Japanese counterpart Fumio Kishida in the Japanese capital Tokyo During the meeting, they discussed bilateral relations between the two countries, and ways to improve them to meet the ambitious two countries, as the parties discussed regional issues, and international issues of mutual interest.

“He said al-Jaafari, the depth of the relationship between the two countries, praising Japan’s stances in support of Iraq, and its support, and humanitarian aid for the displaced, expressing Iraq is looking forward to further cooperation, and security coordination to counter terrorist groups, “pointing to” the need to share intelligence to its importance in the war on terrorism and to contribute to the training of Iraqi forces, “and renewed the invitation to his counterpart to visit Iraq, saying it will contribute to the strengthening of relations, and paid the right direction.

The Foreign Minister called upon the Japanese side to increase the size of exchange Trade between the two countries, which now stands at more than two billion dollars, and the holding of meetings of the Joint Committee in Baghdad, stressing the importance of a speedy opening of the consulate in Basra to support the economy, and open up more prospects of joint cooperation, pointing to the need to facilitate the granting of visas visa for Iraqis wishing to visit Japan their embassy in Baghdad instead of giving from other countries including Jordan; because of their effect on the activation of common interests.

For his part, Fumio Kishida according to the statement about his government’s support for Iraq, and efforts to fight terrorism, saying his country would continue to provide aid to Iraq.

As his country’s readiness expressed to enhance cooperation in all fields, especially in the area of demining, also expressed Japan’s readiness to offer Iraq loans estimated at 500 million yen allocated to the areas of irrigation, and other areas, as well as willingness of Japanese companies to invest in Iraq, adding, “We have provided $ 100 million in aid for displaced people during this year and studying to provide financial support worth $ 200 million in loans to the Iraqi government. ”