Abadi eliminates the positions of advisers in the ministries 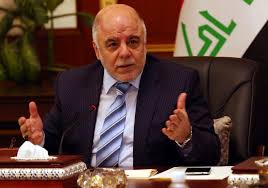 Prime Minister Haider al-Abadi decided to cancel the posts of advisers in the ministries.

“The Abadi has decided on Sunday to reduce the number of cabinet members to be 22 members in addition to the Prime Minister, rather than 33 members within the second package of reforms.

The House of Representatives approved in its meeting last Tuesday on the package The first of governmental and parliamentary reforms included abolishing the posts of Vice President and the Prime Minister immediately, and feminine ministries and agencies to increase efficiency in government work and reduce costs in response to the directives of the Supreme religious authority and the demands of the demonstrators.