Gen. Mark the following: corruption Maliki and Taivih behind the collapse of the Iraqi army

Gen. Mark the following: corruption Maliki and Taivih behind the collapse of the Iraqi army 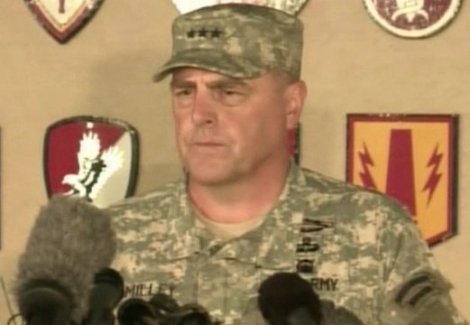 Candidate US President, Barack Obama, to the post of Chief of Staff of the US Army General Mark Miley said, that the Iraqi army will combat has been curbed because of the lack of resources and appropriate leadership and corruption Maliki and Taivih and the corruption of the military and the security office.

This came during a hearing of the Armed Services Committee in the Senate The US, on Tuesday evening, about his candidacy for the post, in which he said that “the Iraqi forces were willing to fight to the withdrawal of US troops from Iraq ends in 2011.

He said he has since been “sabotage referents series (the Iraqi military leadership) because of corruption Nuri al-Maliki’s office ( General Command) in addition to the sectarian Maliki’s financial and administrative corruption, and the deterioration of their training and the corruption of those close to the leaders of al-Maliki. ”

summed up the American officer retreat of Iraqi forces in front of creep Daash in the city of Mosul, saying, “If ago 3 or 4 years without training, without the efficiency and capacity and committed leadership, then it can certainly understand, why the units collapsed last year, before the attack Daash. ”