Parliamentary Finance: the issuance of a new currency will revive the Iraqi economy

Parliamentary Finance: the issuance of a new currency will revive the Iraqi economy 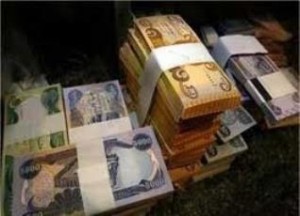 BAGHDAD – morning
parliamentary Finance Committee endorsed the issuance of currency new high categories, pointing out that this process will contribute to the revitalization of the Iraqi economy and reduce dependence on foreign currency, while stressed economist, said the central bank introduced a currency new procedure Saeb very help in raising the efficiency of the payments system and shortcut the amount of cash in circulation.
member of the Finance Committee Jabbar Abdul Khaliq said, a statement singled out the “morning”, that “the issuance of currency large category will reduce dependence on hard currencies in economic activities,” pointing out that “one of the solutions proposed by the central bank to reduce the differences between that dinar and the dollar. ”
He said Abdul Khaliq that “Iraq’s reserves of foreign and local currency enable Iraq to issue new coins and large groups,” noting that the recent meeting between the Finance Committee and the Governor of the Central Bank was on the oscillation winning Iraqi currency against the dollar and the main solutions adopted by the Central Bank in order to reduce the difference. ”
and on the draft raise zeros from the currency, Abdul Khaliq pointed out that “the project could not be implemented at this time because of the economic, political and security situation that prevailed in the country,” noting that “the proposed thoughtful but is waiting execution time and the central bank is It specifies that “. While counting the Finance Committee member Sarhan Sylvana decision of the Central Bank issued 50 thousand class end of the year, as the recovery of the Iraqi economy.
He explained Sylvana, a press statement, that “the issuance of a new class of Iraqi currency requires the presence of the assigned bank reserves Central foreign currency “, stressing that the central bank reserves at the moment, according to what the governor of the bank on the Keywords, enough for the issuance of class 50 000 dinars”. On a related matter, said economist Majid picture: that a central bank issuing the currency of the class 50 thousand dinars and 100 thousand dinars a very true and does not harm the economy of the picture Alsoq.ooodh “morning”, that “this procedure the system of payments where helps to raise the efficiency of the payments system and shorten the amount of cash in circulation,” asserting that “the issuance of a large currency denominations will not lead to any inflation in the market. ”
Suri said, “The government asks for large amounts, and instead of being small payment currency will be the big currencies,” noting that the move does not mean increasing the trading currency, but the process of replacing banknotes and other papers. ”