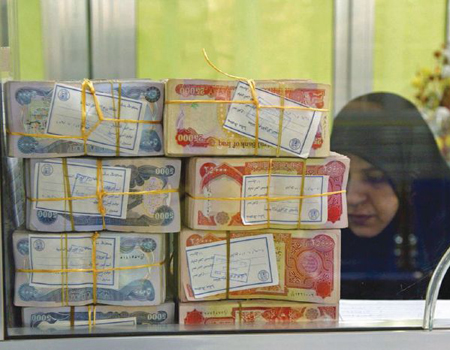 Stressed academia and banking Iraq, the need for «Find ways to attract the Iraqi capital migratory, and work to find stimulating mechanisms have to return in percentage Iraq», as it pointed out that the statistics on the size of the Iraqi investments abroad, «refers to the billions of dollars». Therefore, it considered there is a need to develop a constituent solutions to attract these funds, because Iraq is heading toward overcome the dependence on revenue rentier oil-represented, to activate the production and investment sectors which need more money ». He announced a professor of critical theory Falah Thuwaini, that capital flight «lead to the economic situation is balanced », revealing that« the size of Iraqi funds migrating to the men in the head Iraqis work in Jordan, reached about $ 11 billion, or 20 percent of the proportion of investments in Jordan, as well as about $ 250 billion represents the size of the Iraqi investments in the countries of the world ». He said that laws on investment «crippling because of what punctuated by bureaucracy and routine», stressing the need to «re-considered, at the forefront of the completion of the special investment Law No. 13 of 2006 legislation». He believed that «determine the motives of immigration and avoidance through the relocation of capital, reflect the economic philosophy of the state of economic and financial stability, and work to stop the migration again ». A «challenges related to the structure of the Iraqi economy of infrastructure, roads, markets, coupled with the delay in the insurance sector and the transfer of profits, as well as the weakness of experience in the investment side, and administrative challenges that have led to negative returns and did not lose sight of weaker investment process and separated». Thuwaini announced that «give the opportunity for the private sector and the promotion of investment activity, key hope to attract capital and confront the economic crisis ». He said: «supporting the private sector strategy stopped 30 years ago, which impacted negatively on the development, and led to a state of unbalance in the rest of the supporting sectors». change in performance and stressed the banking and financial Sadiq al-Shammari expert, to the point where the Iraqi economy is currently undergoing a , «require the stakeholders in the banking sector, search for mechanisms serve the change in the pattern of activity that you do». He explained that the foremost «new policies that respond to the goals aspired to requirements, at the top of change investment mechanisms so as to enhance opportunities for the return of the funds migratory capital position», confirming that it is «a great national mission must rise by officials from the sectors of the economy, at the forefront of banks». He pointed Shammari «a great need for legislation of laws and reforms concerning the provision of guarantees of the return of capital and their contribution to sustainable development, which need large financing currently available to the Iraqi businessmen activists outside Iraq». He Shammari to «importance of expediting the legislation guarantee deposits with the Banking Act , which is the gate of the Iraqi money supply available conversion, whether inside or outside Iraq, to projects related to development plans and overcome if the downturn in the Iraqi market ». He said Shammari that the Islamic investment funds can «be a source of funds for banks, and represent vessels meet the investment of funds in accordance with the areas that fit those concerned, whether internal or external to achieve rewarding benefits ». He said: «can these funds be Iraqi economy development gateway through receiving migratory capital, which has become a major figure can be invested in Iraq», predicted that «double to about Best in the event of the use of capital cycle at home ». Conference in Baghdad and Al-Shammari said «the desire of Iraqi private banks to adopt a call for holding a conference in Baghdad in the coming months, is devoted to research in the mechanisms that restore the Iraqi capital to Iraq, through the development of incentives and guarantees legal strengthened banking legislation new able to receive money, through sophisticated contexts and through the umbrella of pro-investment programs, under a stable security environment ». did not Shammari overlooked «the Iraqi Central Bank mission to be an active partner in this national effort that Iraqi banks start it, motivated by concern for the development of Iraq’s economy and contribute to the development of productive sectors of the outputs for the better. »