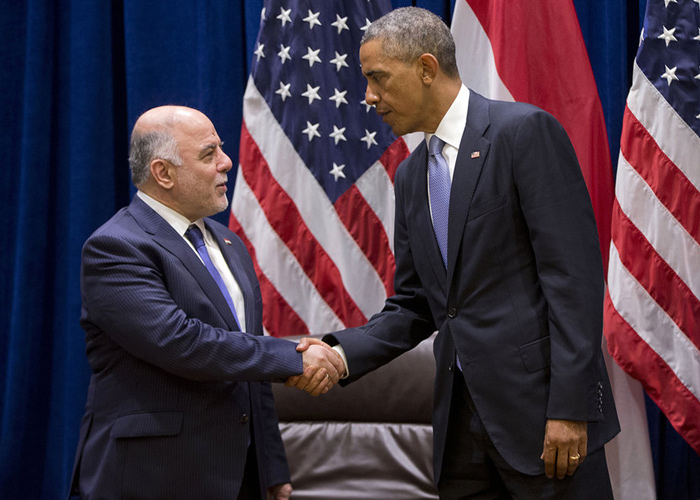 A senior Iraqi official said Prime Minister Haider al-Abadi will be asked to help US President Barack Obama to get the drones and other US weapons worth billions of dollars to fight the organization Daash during his visit to the United States next week but will be asked to postpone the payment of the price of the deal.
And fights Prime Minister Haider al-Abadi al organizing Daash which came out of the mantle of al-Qaida and expansion as a result of the chaos in Iraq and neighboring Syria and seized large tracts of land in northern and central Iraq last year.
He also faces Abadi, a liquidity crisis due to falling oil prices, which hit the money of the Iraqi state. The government expects a budget deficit of about $ 21 billion this year.
During his first visit to Washington as prime minister Abadi hoped to convince the United States, which has suffered from wars to Iraq worth more than US manpower and weapons, three years after the withdrawal of US troops from the country in December 2011 while his army newborn faces Daash organization.
The senior Iraqi official, who asked not to be named, told Reuters in an interview, said that “the problem of organizing Daash everyone now … You can not run away from the problem if I came to Canada, I went to France,” in reference to the attacks carried out by members of the affected Bdaash or base in these countries.
He suggested the great Iraqi official that Baghdad could turn to Tehran if you did not get the help they want from Washington.
The official added, “If this is not available we did it already with the Iranians and others “, saying that this is not the first option. “The Prime Minister is committed (in cooperation) with the United States … What he wants is to make sure that we have a reliable partner.”
and then Obama in August last year, the first US air strikes in Iraq since the US withdrawal launch also allowed the publication of three thousand soldiers US to help Iraq in the fight against the militant group, but Obama has imposed restrictions on the US military role in the battle to be limited to training and advising Iraqi and Kurdish forces.
The Iraqi official said that al-Abadi has a list of requests for advanced weapons, including unmanned aircraft and attack helicopters of the Apache model manufactured by the Boeing Company and ammunition and other weapons provided for during his meeting with Obama on Tuesday. And will also be asked to postpone the payment of the price of these weapons.
The official added, “We are talking about billions of … This is a new approach for us because of the scale of the challenge we face. will cost us Nineveh and Anbar a lot.”
On the other hand, a spokesman for the National Security Council Alistair Paschi said the United States will continue to consultation with the leaders of Iraq to ensure they have their needs to fight the elements of the militant group.
“The United States is committed to providing the necessary equipment for Iraqi security forces, including the Kurdish forces in the framework of the Alliance against Daash.”
Because of the knowledge of the time it takes to train pilots, it is likely that al-Abadi also looking The United States supplied Iraq helicopter Apache Furthermore pilots to drive.
The Iraqi government has announced the second of April victory over the militants in Tikrit after a battle that lasted months for the liberation of the city with the support of the popular crowd and air strikes by US-led forces.
In an attempt to take advantage the momentum of the Iraqi security forces on Wednesday launched a new offensive against Daash in the Sunni stronghold of Anbar. It is expected that the troops advancing in the end towards Mosul, a stronghold of President of the militant group in Iraq.
But Iraq is still burdened by the legacy of sectarianism. The angry Sunni minority Shiite government of former Prime Minister Nuri al-Maliki and the increased anger when he ordered his troops to remove the protest camp in Ramadi in December 2013.
US officials believe that al-Abadi best partner but still cautious toward the unstable political situation in the fragmented state witness up in the Iranian role.