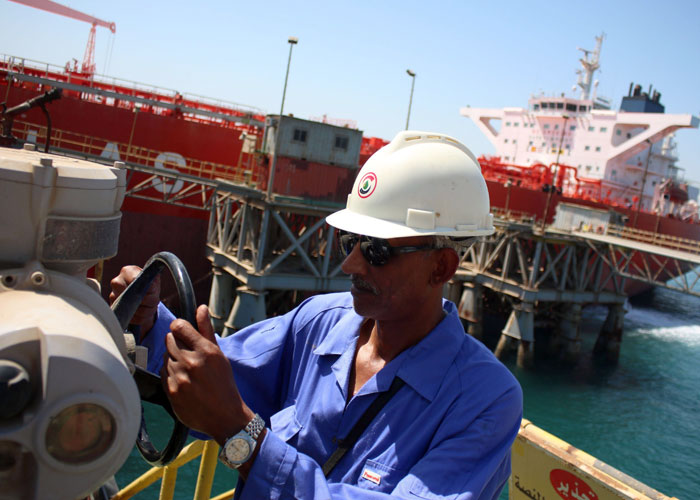 Hit a crisis in oil prices retreat options available to the government of Iraqi Prime Minister Haider al-Abadi in spending, with a government forecast of the current year’s budget deficit of more than $ 21 billion.
In the face of worsening deficit called Abadi Iraqis to “patience” while the government is working to implement economic reforms include restructuring of many state-owned companies. The plan will yield economic and development growth, which promises Iraqis did not take her seriously. He said Finance Minister Hoshyar Zebari said Baghdad is currently in talks with the International Monetary Fund regarding provision of emergency aid. and before that the financial crisis is trying to Government Abadi search for “prosthesis solutions” experts described as “risky and poor planning.” Analysts say that the Iraqi economy suffers from heavy legacy of the government of former Prime Minister Nuri al-Maliki, who blew the operating budget, bringing the number of state employees to more than 4 million, mostly in disguised unemployment, including hundreds of thousands of fictitious names. The Iraqi parliament has approved a budget of 119 trillion dinars ($ 105 billion) for 2015 and expects a deficit of 25 trillion dinars in light of falling oil prices and the continuation of the war waged by Iraq against Islamist al Daash. The budget operational constitute more than 80 percent of spending in the budget size by falling oil prices, and became oil revenues currently less than employees and retirees pay the bill, and devour pervasive in all organs of the State of corruption. The parliamentary source that the Iraqi government “to face difficulties in personnel companies paying salaries self-financing who have gone unpaid for more than 6 months. ” said Rep. Nora Albjara member of the economic and investment commission in parliament, said that the Iraqi citizen is afraid of the possibility of the government to reduce the salaries of employees as a result of the lack of financial liquidity. and was a member of the parliamentary finance committee Masood Haider, may detect the presence of an official letter issued by the General Secretariat of the Council of Ministers includes a decision to distribute the salaries of staff every 40 days, which was confirmed by the Prime Minister of Iraq’s Kurdistan region Nechirvan Barzani. , detection and Finance Minister a few days ago as the pursuit of the federal government to sell quantities of the country’s oil reserve system prepayment, without specifying the details of the quantities and value of those sales, known in the oil industry pre-funding. Justifying Zebari the move need the government to liquidity to fund its military campaign to organize Daash, and to compensate for the lack of Treasury revenues from oil revenues. The Iraqi parliament approved the budget year current, which is the size of spending which amounted to about $ 102 billion, the adoption rate of $ 56 per barrel of oil, in light of falling crude prices and the continuation of the war waged by Iraq against al Daash. It is expected that the government financed the deficit through international bonds and borrowing from local banks. As Iraq plans to withdraw funds from financial institutions, including the International Monetary Fund through its assigned special drawing rights, and the introduction of a tax on imported cars and telephony and Internet networks. She said an economic expert peace Sumaisem that “the suffering of Iraq today is the result of mismanagement and the accumulation of errors, although collapse Oil prices showed defects frightening in the Iraqi economy. ”