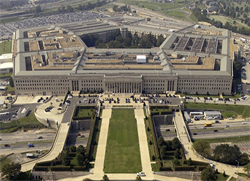 The United States over the nuclear negotiations with Iran, the improvement of the biggest bombs to penetrate the rooms fortified underground if needed for attacks on Iranian nuclear facilities.
The newspaper ‘Wall Street Journal’ that officials at the US Department of Defense (Pentagon) ordered the re-design Benitraturaldkhmh bomb weighs 13 608 kilograms in 2013 because of fears that it were not strong enough to penetrate some Iranian facilities the most heavily guarded.
The newspaper said the test of the new weapon, which includes Optimized Routing System in addition to the renovation firepower recently been in the month of January of this year.
She said likely to require an throw Guenbelta attack Benitrator on a targeted site in quick succession to penetrate and destroy the site, noting that the guidance systems that will prevent the enemy from jamming on private guided bombs signals to keep it away from the track.
There were reports that US officials are confident now that this weapon It can be used successfully against the nuclear facilities of Iran and North Korea if the need arises.
A senior US official, unnamed newspaper, that ‘the Pentagon continues to focus on to be able to provide military options on Iran if the need arises .. We continue to follow the situation closely and concentration ‘.
However, US officials have suggested that the launching huge and devastating attack against Iran’s nuclear facilities can only restore the Iranian nuclear program back a few years at the latest.
Iran and the P5 +1 (Britain, France and the United States, China and Russia in addition to the Germany) have reached the first Thursday in the Swiss city of Lausanne to the framework agreement on the Iranian nuclear program.
It is scheduled to reach a final agreement with the first Tmosalmqubl solutions.