The disappearance of $ 255 million of amounts popular crowd

The disappearance of $ 255 million of amounts popular crowd 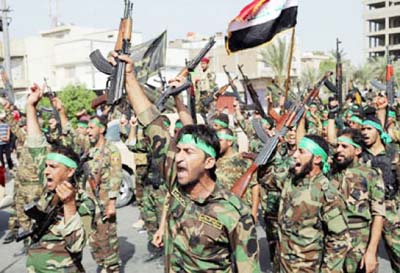 Revealed for security and defense committee in Parliament, on Wednesday, for large operations corruption within the popular crowd Foundation, referring to the disappearance of about $ 255 million had been disbursed to meet the militants crowd requirements’.
He said the Commission’s decision Hajuan Abdullah told him I followed (news) today, said that ‘follow-up audit revealed a loss of $ 255 million had been disbursed to meet the militants crowd requirements’.
He said, I am ‘I asked the chief of the popular crowd on the amounts disbursed by them, he replied that they spent the amount of $ 149 million to the Ministry of Defence as well as the $ 89 million the Ministry of Interior of total $ 649 million. ”
He continued Hajuan, he ‘When my question Iraqi defense minister and attended by all leaders for the amount of $ 149 million, which Tzlmoh of body popular crowd, he replied that they did not receive any amount of this institution, so the amount in question is missing and we are following track and check how to spend it and where did he go? ‘.
and the decision of the Security and Defense Committee that he was ‘the investigation of how to spend $ 89 million which he said Prime CCAMLR crowd, and when we asked officials in the Interior Ministry responded that they also did not receive any amount of this body’ He pointed out that the ‘body crowd says they have 70 thousand fighters, while the number about 50 thousand and the rest of Iranian forces, has been the disbursement of funds to them. ”
According to the defense of parliamentary security member accounts Hajuan Abdullah, about $ 255 million disappeared from the account Disbursements for the popular crowd.