A commission of inquiry Mosul vote to call al-Maliki

A commission of inquiry Mosul vote to call al-Maliki 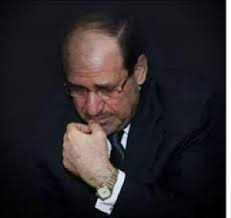 BAGHDAD / News – Iraq Ahmed
precedent in Iraq, the world has not seen the likes of before, and related to the conduct of an investigative committee ‘vote’ on call this person or that, to give his testimony, or not being called, in an important issue of concern to the Iraqi public opinion, at least, that regional and international not.
revealed the Special Committee to Investigate the fall of Mosul, said the statements made ​​by the governor of Nineveh, Ethel Nujaifi, and charged to the former Prime Minister, Nouri al-Maliki, and the commander of the federal police Mehdi Ghraoui, while acknowledged former director Adjutant General’s office, the team first Farouk al-Araji, he received information from the governor of Nineveh stating the intention of the militants Daash enter the city, and he had to deliver the information to the commander of the armed forces, which prompted the Commission to think to question al-Maliki and other officials, despite the objection of some members of the committee, which forced her to ‘adopt voting mechanism to determine the 100 figure will be interviewed during the next phase. ‘
is thoughtful
and says a member of the special fall of Mosul Committee, Abdul Rahman Alloizi, in a press statement, said: ‘The Commission granted, Najafi, two hours to testify and reveal the information available to him, in the face of the members of the Committee investigative several questions has raised over five consecutive hours face which charges to the political blocs in the province of Nineveh that their positions are not clear from the elements Daash and right side delivery from Mosul to Daash It was deliberate. ”
He continues that ‘Najafi face accusations to the Chairman of the Board Former minister, Nuri al-Maliki, that he wants to punish the people of Mosul, through a plan to deliver the right side of the city to the elements Daash, as well as on charges of federal police and its leader, Mehdi Ghraoui, she was complicit with these elements. ”
In this context, Prime assigning Council or Rabiein, Zuhair al-Chalabi, through hosted before the committee, yesterday, that the connector has been, since 2009, lifted a hand Daash morally and not militarily, as she was given a tribute to Daash of $ (11) million dollars a month, explaining that he had sent reports to the Director of the Office of the Prime Minister Former Nuri al-Maliki on what is happening in Mosul, did not receive any response from him.
new details
, the investigative committee revealed new details ‘some mysterious’ presented by the former director of the Office of the Commander in Chief, Gen. Farouk al-Araji, which was approved, according to the members of the Committee, by receiving information from the governor of Nineveh stating the intention of the militants Daash enter the city, and he had to deliver the information to the commander of the armed forces.
It seems that benefit senior officer Commission paid to think to question the former Adjutant General Nuri al-Maliki and other officials, but it collides with opposition members of the committee, which forced it to adopt a voting mechanism.
He says Vice President of the Commission of Inquiry fall of Mosul, Hajuan Abdullah, said: ‘The Commission has completed the formulation and preparation of the initial report, which will extend the work of the Commission to two months’, adding that’ investigations and calls will continue with security and government officials during the current stage. ”
He adds Abdullah, the ‘investigative Committee voted on the presence of former Defense Minister Saadoun al-Dulaimi, the Undersecretary of the Ministry of Interior Adnan al-Asadi before the committee soon’, revealing that Vice President Nuri al-Maliki will present his name to a vote in the Committee to call up and listen to his statements about the fall of Mosul process.
And on the interrogation of Director Adjutant General Office of the team first, Farouk al-Araji, confirms the Kurdistan Alliance member, said ‘answers Araji were not adequate and mysterious, although the change of field and plans commanders were taking place in the General Commander of the Armed Forces Office.’
report of the Committee
revealed the National Alliance member Sabah al-Saadi for ‘end Investigative Committee of writing the initial report, which deals with all the procedures followed by the over sixty years days, and the number of security and government figures, which have been investigated, as well as the request to extend the work of the Commission for other months, as well as the need for the Commission to some correspondence from ministries and security institutions. ‘ He stressed the ‘need for familiarity with the details of the cause of the fall of Mosul, an accurate and detailed and included in the final report which will be submitted to the Presidency of the Council of Representatives’, is probable that the ‘final report will exceed the 50-page’.