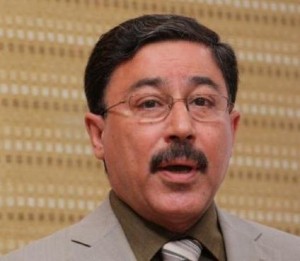 BAGHDAD / news / Samer Mahhmed
governor acknowledged the Iraqi Central Bank on the Keywords, the existence of smuggling hard currency abroad, did not hide his doubts on the involvement of civil banks already submitted forged documents to buy dollars from the auction of the Central Bank.
It was announced in a press conference, I followed (news) Yesterday, An’alchroa to adopt new mechanisms different from what had been followed by previous administrations, notably to reduce dependence on the auction currency window, which was created in 2004 to maintain the stability of exchange rates, and enhance the value of the dinar, and secure hard currency to the Iraqi market. ”
He that ‘the auction window is no longer a daily basis, and will depend auditing mechanisms different from that previously, especially that of the functions (Central) provide currency for foreign trade, pointing out that the currency sale by remittances, mechanisms will be electronically instead of documents that were formerly banks offer ‘.
Keywords and pointed out that ‘the bank in March of foreign currency sale by auction for more than ten years of operation, and this procedure is not true, because a lot of countries around the world rely this method in exceptional circumstances to create balance and stability of the currency’, stressing that ‘dollar selling operations turned of the way of foreign trade to speculation in the markets and reap the profits and keep the banks from the real activity. ‘
accused ‘some companies, non-bank and even commercial business, the shift of activity to speculative currency, taking advantage of the ease of procedures and guaranteed profit and fast, as well as the nature of the work of these parties has become a cover to facilitate many of the processes related to the smuggling of money ‘.
Keywords promised to ‘cash sales to the dollar, is the most dangerous part of the sales processes followed in the auction, which reached record amounts in the last two years, recorded $ 15 billion a year, pointing out that «these amounts is very large compared to the imports of the dollar, and to the country’s need of cash to cover passengers expenses and treatment and others’.
He emphasized the central governor that ‘open to the possibility of supporting the Iraqi economy, likely to control the sale of dollar traded through the application of new procedures process., pointing out that ‘officials pointed to a decline in reserves of hard currency at the central bank, stressing that Iraq does not suffer from any problem, and has a good income with no room to have any worries.
He revealed the existence of ‘a tendency to increase gold reserves basket’, pointing out that the ‘procurement issue Animations and subject to constant lesson ‘, and that’ the bank moves the basket in the form of an almost daily basis to stand on currency and interest rates and the bond market and stock prices and the value of gold. ‘
Keywords and pointed out that ‘the size of the reserve, which is owned by the Central Bank of the money supply exceeds one and a half times, allowing control of the currency, and there are no fears of the process of selling the dollar against the dinar’.