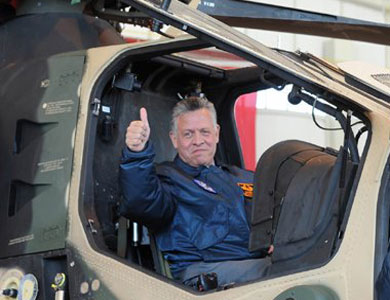 Hours after the letter of the Jordanian monarch, who pointed it out that ‘the blood of the martyr Kasasbeh will not go in vain’, according to Jordanian sources informed on Wednesday evening, that ‘King Abdullah II, made ​​a decision, led by squadron himself continued to Jordanian Air Force, to the bombing of the headquarters of a subsidiary to organize Daash, in their own homes in revenge for the murder of Jordanian pilot Martyr forbid Kasasbeh, burned a kicking neighborhood. The sources added that ‘the Jordanian airline to launch air raids on strongholds of the organization last night, in the Iraqi city of Mosul, which resulted in a number of deaths in the ranks of the organization ‘as they called them. It is said that experts in photography and editing and output of radio and television confirmed that ‘video, which shows the process of setting fire to the Jordanian Martyr, produced high professionalism has made ​​so many wondering about the health of the video, or whether it is a fabrication. ”