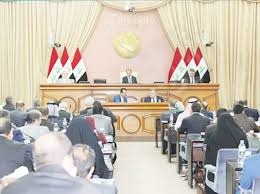 BAGHDAD – News / Iraq Ahmed
passed the House of Representatives, the general budget, for 2015, at the time raised many questions about the budget in 2014, and where it went, and how it has spent, and the surplus, or its debts? .. And this is what did not happen in any country in the world.
Economic observers noted that the budgets after 2004 and put all without discuss the final accounts and no one knows how it was disposed of, with many complaints about the projects that are included and which were just ink on paper.
In other words, it was the budgets of the distribution of oil revenues on the basis of incomprehensible and actions how marred by corruption.
Observers economists that the current budget, which was approved by nearly percent billion and a deficit of nearly twenty billion dollars, not balancing ‘austerity’ but ‘glut’ in custom international economic and Iraq, where he did not exceed the budget in the best of circumstances before 2003, and in time of war with Iran – Iraq, a quarter of that amount, and it goes up to 80 per cent of them to the war effort.
However, the recent oil tremor came to knock the alarm to stop sabotaging each economic establishments and return to revive the industrial, agricultural, commercial and service projects that have become ‘useless’ or ‘non-existent’ because of mismanagement in order to exploit the conditions for the development of privatization alternatives that have not placed yet.
hedges and alternatives
in context, citing an economic advisor to the Prime Minister, the appearance of Mohammed Saleh, that the budget year 2015 includes many of the hedges and alternatives in case of occurrence of unexpected things, and that the operating budget, including an 63 trillion dinars (about US $ 55 billion) and investment amounting to 37 trillion (more than US $ 30 billion), while a deficit of nearly 25 trillion dinars (20 billion dollars).
Parliamentary Finance Committee suggests that the budget will probably not meet the service all needs, but take into account the important things such as security and displaced people, with shows Committee member, Najiba Najib, that ‘budget pressed grades and reduced the upper grades owners’ salaries , to meet the necessary things that are currently needed by Iraq. ‘
spending tourists
, in turn, says the economist, Falah Ahmed, said: ‘approval of the Council of Ministers general budget early is a good step calculated for the government’, returned to ‘budget deficit should be covered through religious tourism activities and other economic, because they rely on a single resource is oil. ‘
explains Ahmed that ‘religious tourism rose 2014, as Iraq visited 20 million tourists’, noting that’ any country in the world was be proud of such number of tourists and prepared by the economic resources task, while Iraq spent on tourists do not benefit them. ‘
sees economist that ‘religious tourism in Iraq can provide very large amounts to cover a large part of the budget deficit, but adds profit to them, as well as the potential contribution to securing jobs for half of the unemployed now what you need from guides and translators and workers, services and other ‘, calling for’ the formation of agricultural economic committee, to determine what should be focused on the high returns to serve the national economy crop. ‘
economic revolution
and remains the key issue in the eyes of economists, is how to dispose of the funds that are properly and look at the real and effective revolution to bring life to the industrial, agricultural, tourism and other sectors, and to stop seeing that Iraq is not a consumer country, and that the economy is open to those who scooped him without the expense.