The first statement of its kind .. Tehran: Maliki sectarian policies behind the emergence of Daash !!

The first statement of its kind .. Tehran: Maliki sectarian policies behind the emergence of Daash !! 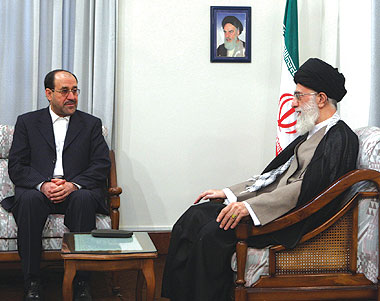 Accused the Iranian Foreign Ministry adviser, Mohammad Ali Sobhani, yesterday (Tuesday), the current vice president of the Republic of Iraq, Nouri al-Maliki, following sectarian policies during his presidency to the government, which led to the formation of an incubator for the organization «Daash».
This came in statements made by the site «telltale News» E-Iranian.
Sobhani said that the economic and social problems that plague Iraq, in addition to sectarian policies followed by the al-Maliki led to the formation of a popular base for the emergence of Daash in the region.
Sobhani said that Daash benefited from the weakness of the state’s authority to appear in Iraq, adding that «Lola policy Maliki government exclusionary against Sunni groups in the country, to found the organization has a popular incubator between Sunnis», recalling the control of the organization Daash a big city, such as Mosul and large areas in a short period, and attributed the reason for that injustices suffered by the people of the year and turns them into support Daash, who promised to «revenge».
Sobhani also drew criticism for the Assad regime, saying: «The Syrian people across the initially legitimate demands peacefully, but the Assad regime has tried to suppress demonstrations with excessive force led to the emergence of armed groups later, pointing out that the Syrian regime justifies it by saying« if not to suppress the demonstrations were the events took a different course », stressing that he does not agree with this view, saying that« if the Syrian government has taken steps at the beginning of the demonstrations to comfort her, the situation of what amounted to what it is today ».
Sobhani also discussed the Iranian-Saudi relations, saying: «The various policies pursued by countries, turned into a hostile attitudes between Tehran and Riyadh», adding that «in case follow both parties conciliatory policies towards each other, the door is open to improving relations between the two countries ».

It is worth mentioning that Mohammad Ali Sobhani work ambassador to Oman, and then in Beirut during the rule of former Iranian President Mohammad Khatami between years (1997-2005), and with the election of the current Iranian President Hassan Rohani in 2013 was appointed an adviser to the Ministry of Foreign Affairs.