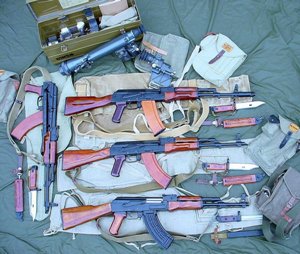 Passed the Baghdad Provincial Council, the citizens in the Iraqi capital, buy light weapons because of the deteriorating security situation.
He said the security committee in the Council member Fazel Shuwaili in a statement singled out by the ‘Agency News’ that the role of the Security Committee of the Council of the province of Baghdad to issue decisions and recommendations and follow-up with each and Interior Ministry officials and operations Baghdad on existing and enabled security issues, including the increasing phenomenon of the sale of light and heavy weapons in the neighborhoods of the capital recently .
He Shuwaili that the Ministry of Interior provisions and the laws of the inadmissibility of possession of heavy weapons to the citizens, but the ministry is permissible for a citizen to own a piece one weapon in his home because of the security situation is confusing and extraordinary experienced Baghdad because of attacks organization Daash terrorist who enter the country in a security crisis, prompting citizens to defend same with the absence of the full vision of security after the fall of Mosul.

He said a member of the security committee that government decisions are clear and explicit, but the extraordinary situation in the province of Baghdad vogue phenomenon necessitates the existence of the weapons sale a lot of markets that sell small arms to the citizens in the capital now.