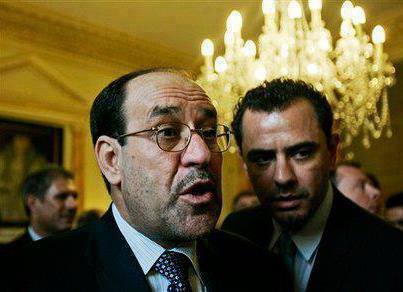 Works close to the head of the former Iraqi government, Nouri al-Maliki, to undermine the improvement in the Iraqi-Saudi relations, accusing Riyadh through the support organization ‘Daash’, according to what he sees Saudi and Iraqi observers.
And surprised observers statements, issued by the MP in the ‘coalition of the rule of law’, Rubaie, which was accused by Riyadh to provide support for’daash ‘, which is paid to the suspension of security coordination between Riyadh and Baghdad process, warning that this accusation could cast a shadow the relationship is still fragile between the two countries.
Wondering professor of political science at Saudi universities, Fahd Oraini ‘How accuses Saudi Arabia in Daash responsibility dilate, or funding organization?’.
He points out that his country is ‘seriously working on counter-terrorism, which aims to Nile from many countries in the region, including Saudi Arabia, which has taken a number of measures to fight militant groups’.
Seeks ‘coalition of state law’ led by Nuri al-Maliki, to undermine any effort to Abadi government in the interest of the country, an investor all his energies to research what hinders any step that might reveal, in the future, for the mismanagement of the previous government.
Saudi Arabia says it is fighting terrorist organizations strongly, and it tightened sanctions against those who incite to come out to fight abroad, in addition to the donation, or the promotion of extremist groups.
The al-Rubaie, a coordinator on the subject of terrorism between Baghdad and Riyadh had begun to send letters to the accusation Riyadh about finance (Daash).
Observers ruled that al-Rubaie’s comments are just a personal opinion, arguing that ‘doubts always been mutual between Baghdad and Riyadh since 2003, and especially during the presidency of Nuri al-Maliki to the government, as well as a lack of resolve the issue of Saudi detainees in Iraqi prisons because of their involvement in the fighting along with regulations militant during the years that followed the invasion of Iraq. ‘
The Iraqi foreign minister, Ibrahim al-Jaafari, had last month announced that Saudi Foreign Minister Prince Saud al-Faisal, told a meeting in Riyadh special intention to re-open its embassy in Baghdad.
He called Oraini, Iraqi officials to ‘transcend sectarian dealing with the Kingdom’, stressing that ‘Saudi Arabia can not be considered to Iraq from the gate only a year, but believes that the Iraq country’s social fabric Multi, strength in the nip sectarianism that breathed life where former Prime Minister Nouri al-Maliki. ”
For his part, MP saw for ‘rule of law’ Muhammad Chihod, that ‘Saudi Arabia is supporting the project, which adopts (Daash) and (Al-Qaeda), and all the extremist currents’. He stressed that the ‘Iraqi support for terrorism has cost a lot of lives of their children.’
However, the Iraqi political expert, Salman al-Obeidi, confirms that the ‘Saudi Arabia large and essential part in the Arab body, and that the return of Iraq to the Arab fold a key issue in the return of stability and strength.’
He adds, that ‘King Abdullah bin Abdul Aziz, big personality, and can play a major role in achieving national reconciliation in Iraq, and work to attract Arabic strong in front of Iranian influence, and this issue will only be achieved with the support of the Iraqi-term national project for sectarian and ethnic’.
He points out that ‘can not end religious extremism in Iraq only through a national project stands in front of the Iranian influence that it became clear that the primary nutrient for sectarianism in Iraq’, calling on the Prime Minister, Haider al-Abadi, a ‘not to listen to the voices of anomalies in the rule of law and the continued openness of the ocean Arab because the interest of Iraq. ‘
It is noteworthy that Iraq’s relations with the Arab surroundings witnessed during the period of the government of Nouri al-Maliki, which lasted eight years, great tension and mutual accusations of isolated Iraq from those countries, and in return paid to throw into the arms of Iran.

After giving confidence to the Government of Abadi, the Iraqi relations have been open to the Arabian Ocean, especially in light of the participation of Arab countries in the international alliance to fight ‘Daash’ in Iraq. Maliki, however, is still trying to thwart the work of the Government of Abadi and abetting, according to informed sources revealed on more than one occasion.