Serious recognition from George W. Bush to network “CBS”: the emergence of “Daash” one of the remnants of the invasion of Iraq!

Serious recognition from George W. Bush to network “CBS”: the emergence of “Daash” one of the remnants of the invasion of Iraq! 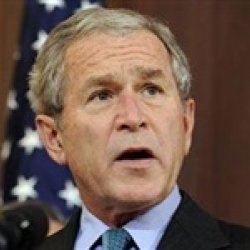 He former US President, George W. Bush, deeply regret that his successor’s decision to invade Iraq in 2003, the security implications threatened the stability of the whole world, and the most important implications of the emergence of this organization ‘Daash’ in Iraq and Syria.
In an interview with Channel ‘ CBS ‘America, the former president said he was very satisfied about the decision by the administration earlier in sending US troops to Iraq in 2003, and the elimination of former Iraqi President Saddam Hussein, but added:’ I regretted only when generated by the resolutions of the invasion Iraq, the emergence of an extremist group like ‘Daash’, which I consider the second part of the al-Qaeda extremist ‘, referring to the security vacuum caused by the US government after the withdrawal of Iraqi territory gradually until 2011.

In a related context, linking between the idea of ​​former President Saddam Hussein’s insistence on staying in Iraq – despite the US-led invasion and have not chosen to flee idea Albulad- outside and between the onset of extremist organizations in the Levant.