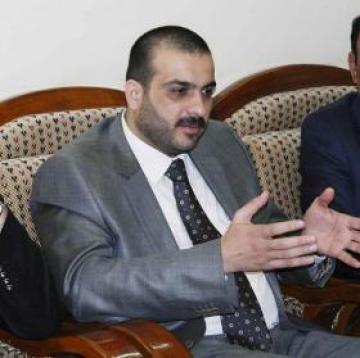 Alliance intends to Iraqi forces, to question the prime minister, Haider al-Abadi, for the delay in the enactment of the National Guard laws, the general amnesty and the Justice and Accountability, which had been stipulated by the Alliance to participate in the government.
According to MP for the Movement Solution internalized in the coalition, Mohammed Karbouli, that ‘the National Guard general amnesty, accountability and justice laws are our terms President, that our participation in the government settled Abadi, log K ow has a deadline of three months after the formation of the government to implement them.’
He accused Karbouli, according to a statement issued by the Government of Abadi as ‘not even still today, avoids these promises, and did not witness a real seriousness to implement’, stressing that ‘coalition forces sent serious signals to the prime minister for questioning and accountability for the government program.’
For its part, describes the MP for the ‘Kurdistan Democratic Party’, Sherine Abdel-Rahman, the ‘Kurdish parties waiting to meet the Prime Minister promise made to himself, during the negotiations to form a government’, explaining that ‘Abadi has not yet taken any positive step towards Kurdistan ‘.
Confirms Abdul Rahman, in turn, that the ‘region will determine the choice to stay in the government or not, after three months given to Ebadi timeout’, warning at the same time, ‘continuing silence government Abadi toward the KRG rights, so that the continuation of this case will pay the Kurdistan Alliance to take firm and resolute stand toward Baghdad. ‘