National: reject the nomination Rafie al-Issawi to the defense portfolio .. Najafi put the name for the purpose of extortion

National: reject the nomination Rafie al-Issawi to the defense portfolio .. Najafi put the name for the purpose of extortion 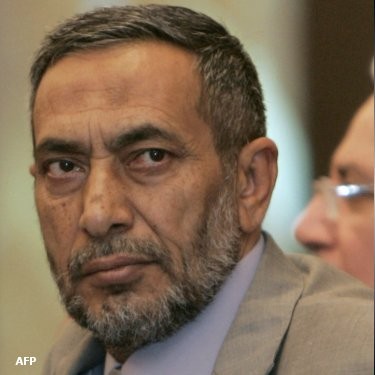 Ruled out the head of the national parliamentary Dr. Mahmoud al-Mashhadani nomination acceptance Rafie al-Issawi to the defense portfolio, stressing that the name is a trader, and to be asked ‘I mean here Mr. Osama Najafi, Vice President of the Republic is not the author of the decision’.
He said al-Mashhadani, in a statement to Channel ‘Tigris’ space seen by the agency news today (Saturday): The Najafi gave the name Rafie al-Issawi candidate for the defense portfolio to promote inclusive of Khalid al-Obeidi, and this abuse of Issawi and Obeidi together like trying to blackmail the political forces of Her nomination, Hicol them:’ Arawikm death So happy with Backona ‘.
He added that al-Mashhadani, all the names put forward now to fill the defense and interior portfolios are for media consumption excepting the debate about them being two names and Satrhan after Eid al-Adha.
He said the leader of the National Bloc that his decision regarding the candidate of Defense is Dr. Salim al-Jubouri, and that the decision-maker to provide the name of the candidate and Minister of Interior, Dr. Haider Abadi, and not vice-president of the republic for the ‘affairs of the (Mako)’, adding that al-Jubouri and Abadi, and after that they agree on candidates Defense and Interior to the President of the Republic went out national consensus on two bags Alamnatin Alsiadetin and their importance, which is also not different for the three presidencies.

He stressed Mashhadani also stressed that it is after that enjoys the candidates to accept the five actors in the Iraqi scene regarding the fate of these two bags, which the parties present on the ground and the first of America’s Second Iran and the third Arab coalition representatives in Saudi Arabia and the Fifth Turkey in addition to the sixth these parties agree the Iraqi political blocs.