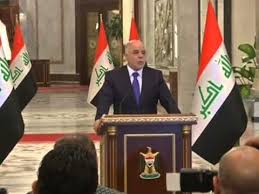 Initiated by Iraqi Prime Minister Haider al-Abadi his reign two steps described Iraqi political sources as reflecting its commitment to the application of the government program that put in front of the parliament and won his confidence.

And won a step-Maliki to stop the aerial and artillery bombardment of civilian areas where there are Daash satisfaction of its population and its enemy goodwill gesture will be followed by steps, especially as it was one of the demands of the Sunni forces involved his government.
And Prime Minister and Commander in Chief of the Armed Forces Haider al-Abadi, for issuing orders to eliminate the Iraqi army to halt air strikes and military areas where there are civilians, and controlled by the organization Daash.
Ebadi said issued orders to stop the bombing and the provinces in places where there are civilians and controlled by Aldoaash. Adding that we will not stop trying to pursue them as they take the protection of civilians Kmtaras them.
The move coincided with the decision to have a booster is to fight corruption and stop wasting public money, which was a feature Maliki government
Informed sources said that a committee made up of a group of well-known personalities of integrity, objectivity and moderation and not belonging to any political party entrusted Abadi survey information about the property and real estate, villas and businesses, the number of officials and ministers in the previous government had bought in Europe and the United States and Britain for the self-employed and paid their price of the Treasury the state through investment office and ministerial positions.
She Almassadraly firms and commercial offices in London dating back to the great personalities and parties run by former ministers settled in London after being found suspicions of corruption on the involvement of stealing public money are now running those companies
Revealed the same sources that the committee, which was formed after the completion of Prime Minister al-Abadi to a ministry and gaining confidence in the House of Representatives and placed in the hands of officials influential in the political process visualization to prosecute people associated with sons Iraqi officials were in control of the commercial contracts, financial and economic ministries mission is now in the process of completion of the inventory of the stolen money and the volume of contracts with foreign companies, especially medicines and rotten food that entered Iraq.