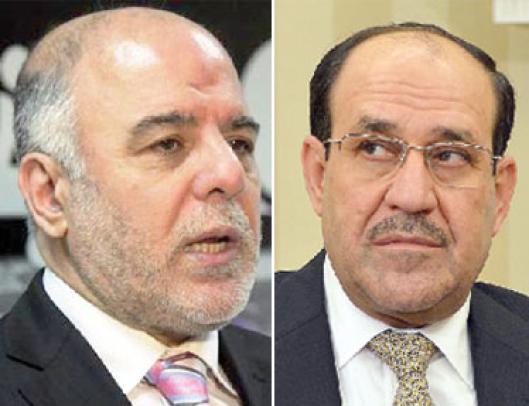 Criticized Vice President Nuri al-Maliki on Sunday, the decisions of the Prime Minister Haider al-Abadi relating to cessation of the bombing of cities fear that civilians are at risk.
Al-Maliki said that some cities abandoned by her family and became the camps to organize ‘Daash’ who wants to hunker down not entitled bombing cities, noting that its ruling differs from the rule of the city where the citizens .
Maliki said in a joint press conference held today, with the governor of Karbala, Akil Turaihi, that ‘some cities now deserted, abandoned by her family and turned into residential areas to Daash’, noting that ‘this is not the cities, but the camps of Daash different rule for rule of the city in which citizens, the fact that these gang met in the place and want to shelter not entitled bombing cities’.
He stressed, saying, ‘always warn of indiscriminate bombing of cities, because we do not want and we are targeting Daash causing offending citizens’, explaining that ‘the city where residents must have the utmost caution in striking targets’.
He continued, that ‘targets within cities can be hit, but the smart weapons and not weapons cause damage’, explaining that ‘already beaten prevent cities populated even though the Daash, if only accurate targeting’.

It is noteworthy that Prime Minister Haider al-Abadi said, yesterday, that he had issued orders two days before the bombing to stop all the cities where there are civilians, even though he found the ‘Daash’, pointing out that the state will not stop the prosecution of terrorists in all areas.