Ministry Abadi formed under American pressure .. and Kerry to visit Iraq as soon as the government announced

Ministry Abadi formed under American pressure .. and Kerry to visit Iraq as soon as the government announced 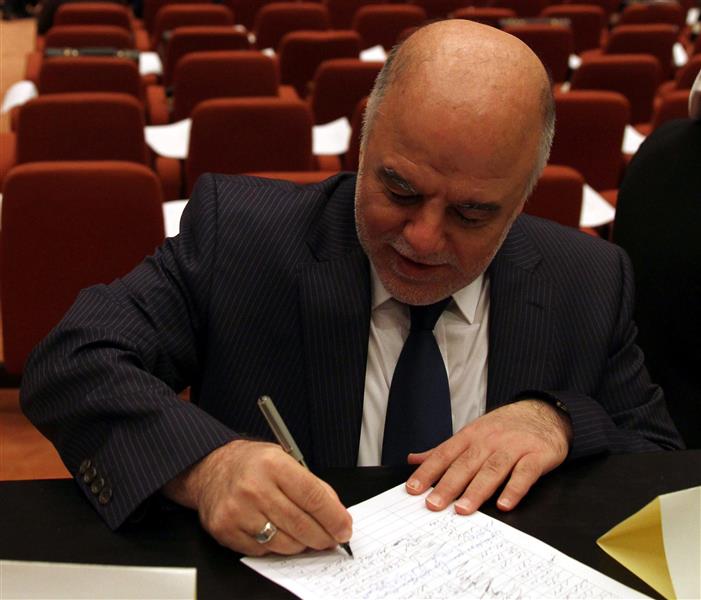 News Agency learned from a source in the National Alliance’s request to hold a hearing  (Monday, 8 September / September 2014) came at the request and direct American pressure.
The source explained that the Assistant Deputy Minister of Foreign Makourk Brett, who arrived in Baghdad two days before the leading victims of communications and direct negotiations with the various political blocs to convince them of the need to vote on the cabinet line first, and then to agree on the contentious issues at a later time.
According to press reports, the line-up which will be described by the government of the status quo, because the three blocs is not satisfied with them, for the Shiites there are differences between the factions over the distribution of ministerial portfolios, especially among the Islamic Supreme Council, headed by Ammar al-Hakim and the Badr Organization, led by Transport Minister Hadi al-Ameri.
As for the year, they complain of lack of access to key ministries and bags which was granted to them are the ministries of marginal, while complaining about the Kurds of failure to respond to their demands, especially for the launch of the salaries of the staff of the Kurdistan region, which stopped by the Prime Minister outgoing Nuri al-Maliki six months ago and attempts to pull the outer bag of them.
She said reports that Brett pressure towards the government’s announcement Monday before the expiration of the period granted to the Constitutional Ebadi for the completion of its formation, the government entrusted to him by Iraqi President Fuad Masum, in 11 of the last month. He said Brett had persuaded the political blocs to postpone Search disputed issues until after the formation of the government, which awaits the international community, especially NATO to lay the foundations of support in the face of the organization of the Islamic state ‘Daash’.
She pointed out that al-Abadi has intensified its contacts and continued closed-door meetings and individually during the last few hours with the parties in the Shiite coalition to end the differences between them over the distribution of ministerial portfolios.
He was accused of Abadi some politicians blocs to exploit the time factor to impose some conditions, and stressed in a press statement released by his press office that he ‘would not accept any conditions be unconstitutional’, attributing the reasons for the late submission of the cabinet to the insistence of some of the blocks on offer candidates do not meet the required conditions in terms of efficiency and integrity.
The source said that U.S. Secretary of State John Kerry will visit Baghdad immediately after the announcement of the new government to hold talks with President al-Abadi to discuss the formation of an alliance to fight al-‘Daash’ not only in Iraq and Syria only, but each area where there are.
President Barack Obama said last Thursday ‘there must be an Iraqi government university and we continue to achieve this by pressing and when this government the possibility that Iraqi forces are more effective’.

He added that ‘the study of the laws of the Baath Kajtthat and give people opportunities to engage governmental functions and with the government’s strategy is correct, it can make progress on the level of security in Iraq. ”