Washington threatens Barzani: military support in return for reducing the demands of the Kurds to form a government

Washington threatens Barzani: military support in return for reducing the demands of the Kurds to form a government 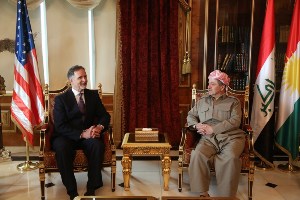 Threatened the American ambassador to Iraq Robert Stephen Beecroft Kurdistan Region President Massoud Barzani to withdraw military support, air and international organization to fight the so-called Islamic State (Daash) in the event of his insistence on the implementation of all Kurdish demands for the formation of the next Iraqi government, led by Haider al-Abadi.
The correspondent for the news agency a source in the Kurdish mass change in Baghdad, said the American ambassador Contact President of Kurdistan, Massoud Barzani, and asked him to participate in a government-Abadi, without any limitation or condition.
The source, who preferred not to be named, said Barzani understand the message in an interview with the American ambassador, told the Kurdistan Alliance delegation negotiating the need to cut the roof of the Kurdish demands in negotiations to form a government.
It is known that the delegation of the Kurdistan Alliance presented Masmaha ‘group initiatives as a goodwill gesture’, which he will stop for three months for exporting oil independently, and the export of one hundred thousand barrels across the company Sumo Federation, pending crystallize settle the dispute petroleum, that receives its budget financial delayed for about 9 months, as demanded by the Kurdistan granting 4 Ministries, which she described Shi’ite sources as ‘good compromise’.
Referred to the American ambassador in Iraq, he had visited the head of the delegation of the Kurdistan Alliance negotiating Foreign Minister Hoshyar Zebari said in his office in Baghdad last week, and’astardha talks of the political blocs to form a new Iraqi government within the time limit constitutional and positive cooperation between all the blocks to accelerate the agreement on government formation The new, as the parties discussed increase international and regional cooperation to combat the organization ‘Daash’ and defeat (according to a statement issued by the Office Zebari).