Source: Alliance of Iraqi forces tends not to participate in a government-Abbadi

Source: Alliance of Iraqi forces tends not to participate in a government-Abbadi 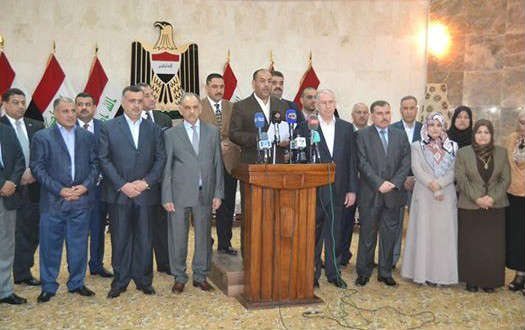 A source familiar with the alliance of the Iraqi forces, after a meeting of the leaders who are authorized to negotiate with Prime Minister-designate Haider Abadi, that things are moving towards non-participation in the next government after a series of meetings with the National Alliance Shiite.
The source said that the atmosphere that prevailed in the last meeting was not positive and did not live up to a state of change sought by politicians, but the insistence on the previous approach in dealing with the Iraqis standards still prevailed, Alliance National still Yassouf demands and intriguing, and a number of the demands of the provinces Almentvdh six by lines red by some members of the National Alliance hence can not come up with solutions in the midst of this stall, so the coalition forces and Iraqi commanders are moving towards non-participation in the next government.
The source added that the coming hours will witness a meeting of the Alliance of Iraqi forces and a coalition of national decision goes towards non-participation in the government of al-Abadi, considering that there is a consensus in favor of this resolution to give a message to the international community that we are not satisfied with the practices that exposed an essential component of the Iraqi people, as news agency quoted him National Iraqi News Agency.
The coalition pointed out last night that there is no agreement on his paper put forward by the Shiite alliance in regards to the demands of the six governorates ‘Almentvdh’, which began demonstrations and sit-ins since late 2012, which Anbar and Salah al-Din, Diyala, Kirkuk, Nineveh and parts of Baghdad, demanding the release of detainees and innocent detainees and prosecute ‘violators of the symptoms of’ prisoners, as well as change the course of government, and the abolition of Article 4, terrorism and the law of accountability and justice and the confidential informant and the issuance of a general amnesty and abolition of exclusion and marginalization of the year.
A source in the coalition forces, Iraqi Abadi did not appear any flexibility in dealing with the rights and demands of the Sunni component, which is the basis for his participation in the next government. A statement from the coalition said the meetings are still ongoing about the developments in the formation of the government.
He pointed out that it was the formation of a supreme body responsible for resolving the final decision in regard to matters of negotiation and authorized by the coalition to take the appropriate decisions and includes: Osama Najafi and Saleem al-Jubouri, Saleh al-Mutlaq and Jamal Karbouli.
The statement added that the body may have noticed that there is a reluctance and lack of seriousness to address the demands and rights by the prime minister-designate, in particular in relation to the weight of the Sunni component, prompting the body to the reservation with the specific requests of interest to fans of the six governorates, ‘and still meetings continuing to follow up the developments and deal with them in order to preserve the rights and demands and the weight of the component that represents’.
For his part, revealed a source close to al-Abadi he intends to expose the blocks that you want to block the formation of the government documents. He said that ‘there is evidence and documents condemning the personalities of political blocs trying to block the formation of the government through pressure and raise the level of the roof to the limits of the demands are unreasonable and far from logic to achieve their own interests’.
He pointed out that the figures of the blocks involved dialogues and negotiations have tried all the complexities of the situation and the problems of its goal to stop the wheel of negotiations, which we passed all the spammers narrow that some have tried to put the goals and intentions.
He emphasized that ‘Abadi will be forced to reveal all threaded through the detection of these figures and documents in his possession to inform them of the Iraqi people being affected by these behaviors and lose because of the blood of Zakia pure terrorism’.
He added that ‘of trying to thwart the formation of the government is the same as supporting terrorism and standing in front of the wheel of progress in negotiations to form a government of national consensus through which we are trying to build national unity and the elimination of terrorism, criminal’.

Iraqi President Fuad Masum, commissioned in 11 of the last month, the candidate of the National Alliance Shiite Haider Abadi formation of the government, according to the constitutional timings, to announce the new government before next Tuesday, the ninth of this month.