China is working on a submarine manufacturing supersonic five times

China is working on a submarine manufacturing supersonic five times 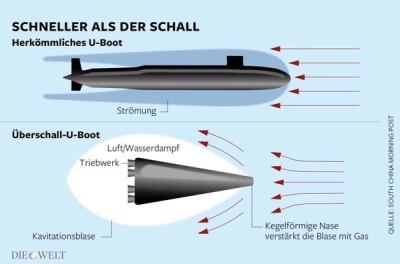 As busy trying to innovate in the world of high-speed aircraft, shorten the distance between Shanghai and Los Angeles in four hours, Chinese scientists working on developing technology that allows the submarine to travel quickly 1480 meters per second, and cut the distance mentioned only two hours underwater. This does not just mean a new revolution in the world of war and espionage, but also open new in the world of transport across the ocean.
According to researcher Lee Vingshen, Harbin Institute of Technical in China, that his team is working on the development of such technology. Can submarine operating with this technology to cut 5,300 km per hour, and that the transformation of the world actually a small village. It is known from the Harbin Institute that specializes in the development of new technologies for the manufacture of satellites, missiles and weapons in general.
The technique can make the submarine moves faster than sound in the water, and positioned to overcome the noise of them underwater. It is known that the speed of sound in air, temperatures in the standard, amounting to 340 meters per second. The speed in the water rises to 1482 meters per second.
It seems that the breach of scientific, which enabled Chinese scientists have access to this technology, lies in their success in the invention of the air bubble, surrounded the body of the submarine, and reduce friction with water pressure, according to Lee Vingshen, adding that this bubble opened up other productive, in other areas.
It is not usually the Chinese to talk about their techniques new, but to me Vingshen said they supplied the submarine with a semi-spherical tapered, so-called bubble of gas, forms a barrier between the body of the submarine and water. This means that the Chinese bubble compensated for powerful engines and smooth surfaces that are commonly used to reduce the water resistance to the movement of the submarine forward.
China is not unique in research in this area, because the Germans and the Russians also successfully tested an unmanned moving objects inside an air bubble under water, but they did not talk about break the sound barrier. Previously, the Russians tried to torpedo goes inside an air bubble quickly 370 km per hour. This speed does not live up to the speed of sound, but moved torpedo ‘Chkaval’ (wind storm) underwater for the first time quickly outgrow four times better speed torpedo in the global arms market.
The speed of conventional torpedoes about 130 km per hour only, but the German naval force talking about a new torpedo speed of 800 km per hour, Vaitir underwater as the rocket flies in the air. This means that the German torpedo Ripper, named ‘Barracuda’, ruthless, not because of his speed, but also because of its ability to maneuver and explosive ability.
She spoke Company ‘Del’ on the front page for electronic ‘rocket watery’ fluent maneuver, little noise, and thus difficult to detect him with finding noise. The company was inspired by ‘Dil’ rocket design technique of water and fish Barracuda aggressive.
And provided scientists Dell torpedo ‘Barracuda’ new technology used in the manufacture of the same water bubble of water vapor surrounded Bataiwrbeid and reduce inadvertent contact with water. It also provided him with a tapered moving contain sensors to detect objects that may be encountered, Vinor to stir him full torpedo, with Faqaath, away from the bulkhead through to the target.
It uses a liquid membrane Vingshen me, instead of a bubble of water vapor in the gas moving submarines superstar forward, according to his statement to the newspaper, the South China Morning Post ‘. The body of the submarine itself produces thin membrane, which Aglvha liquid layer. This reduces friction with water since the beginning, and increases the speed of the submarine, but the film turns into a tide-driven and accelerates the speed when entering a ‘verb Ripper’.
It is known that submarines and ships used various techniques to prevent the torpedo from accessible, including fishing nets of iron by the torpedo, and walls made of volatile substance freezes within seconds in front of the torpedo, and fired from the barrel of a cannon. And is supposed to be the Chinese high-speed submarine is the first of its kind to be able to avoid natural barriers, and fitted with new techniques to avoid being infected Bataiwrbeidat.
Expert raised Hajo Epkh, the Military College of Marine in Munich, many of the questions left me Vingshen without clarification, including the distance that can continue their submarine, which kicks off this speed, and the amount of fuel consumed.

The speed of the Russian rocket Chkaval 370 km per hour, but does not maintain this speed for more than 15 km, and consumes 100 kg of kerosene in it. Moreover, to see that the high speeds Epkh always be associated with greater noise, and this makes the submarine open to the enemy, because to me Vingshen did not talk about the capabilities of the submarine stealth and avoid detection by radar, underwater noise.