Maliki rejects calls Biden to divide Iraq, who failed to maintain its unity

Maliki rejects calls Biden to divide Iraq, who failed to maintain its unity 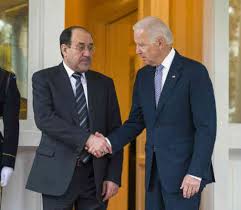 In an attempt to show his commitment to the unity of Iraq and rejected calls divided attacked al-Maliki, Vice President Joe Biden, and invited him to stop calls for the division of Iraq at a time when Iraq out more than half the area of the control of Maliki’s forces and twitch six provinces against the policy of sectarianism which points to his failure to maintained on the basis of the partnership between the Iraqi factions over his two terms

The face of Iraqi Prime Minister outgoing Nuri al-Maliki in his weekly to the Iraqis, Wednesday, and seen by “squares of liberation barbs for Vice President Joe Biden to his call a few days ago to divide Iraq for the provinces of Shiite, Sunni and Kurdish, and pointed out that some of the came sectarianism to Iraq, in signal to Washington, trying to torpedo the ongoing political process in the country and violating the constitution through calls to divide Iraq, which came out recently, Vice President Biden’s remarks emphasize the need for the establishment of provinces in Iraq along sectarian Shiite, Sunni and Kurdish. pointed out that the Iraqi constitution has approved the establishment of provinces But he did not approved on the basis of nationalism and sectarianism.

Maliki called on Iraqis to respond to calls Biden refusing to autism and what leads him from the chaos and killing and destruction. He asked the Vice President to stop these calls, which explained that it hurt and destroy Iraq and to be a friend of Iraq, not an advocate for divided on sectarian basis. limit on expression

Observers believe that the attack on al-Maliki, Biden and his keenness on the unity of Iraq reflect the anger and displeasure of Washington’s stance in refusing to renew his mandate Maliki and prevent attempts to renew Regan widening circle of popular rejection of his policy toward sectarian Iraqi components