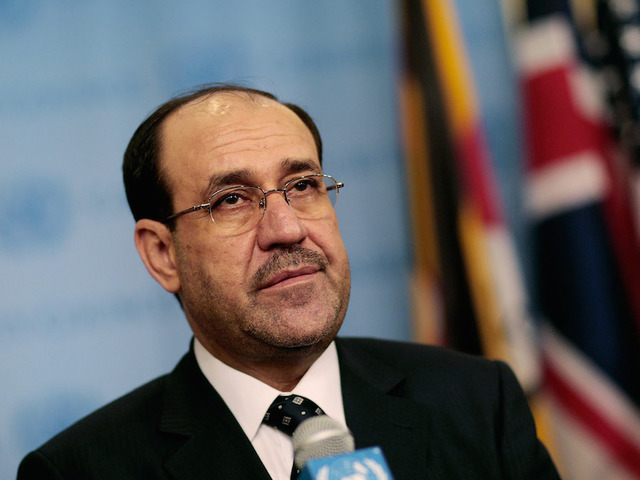 The nomination of Haider al-Abadi provoked an angry response from al-Maliki, who deployed his security forces in Baghdad and accused President Fouad Massoum of staging a coup.

U.S. officials welcomed what appeared to be the end of al-Maliki’s eight-year reign. It came after the U.S. launched airstrikes in Northern Iraq on Friday, an action President Barack Obama said was necessary to protect U.S. personnel and religious minorities from Islamic State militants.

The president has called the Islamic State’s targeting of religious minorities a potential genocide and said America must act to prevent it. He warned that American military would attack Islamic State militants if they threatened the Kurdish capital of Erbil.

American forces also have begun to drop food and water to the thousands of Iraqis trapped on a mountaintop in northern Iraq, and Obama said Saturday that Great Britain and France would join in the humanitarian effort.

Iraqi government troops have been fighting for two months against Islamic State militants, and thousands of Iraqi civilians have died. International concern around the conflict has heated up as the humanitarian crisis grew in northern Iraq.

Here at DecodeDC, we’ve put together a primer to help you better understand the crisis in Iraq and we’ll continue to update this post as the situation develops.

Q: Who is Haider al-Abadi?

He was born in Baghdad in 1952 and was educated at the University of Baghdad and the University of Manchester in Britain. Like others in Iraq’s current leadership, al-Abadi lived in exile after his family was targeted by Saddam Hussein’s regime. The Washington Post reports he was trained as an electrical engineer and entered politics after the U.S.-led invasion of Iraq in 2003. He then became minister of communications, and more recently deputy speaker of parliament.

Q: What happens next?

Al-Abadi has 30 days in which to form a new government that also includes the country’s Sunnis and Kurds, according to Iraq’s constitution. Al-Maliki would remain as Iraq’s leader during that time.

Q: How is al-Maliki taking the demotion?

Not well. In a late-night television appearance following the announcement, al-Maliki said he would file a formal complaint challenging the decision and showed no signs of relinquishing power. The Guardian reports that troops loyal to al-Maliki deployed to key locations in Baghdad, raising concerns of a prolonged power struggle.

Q: What do we know of al-Albadi’s views?

He is, like al-Maliki, a member of the Shiite Islamist Dawa Party, which formed out of political opposition to Hussein’s Sunni Baathist dictatorship. The Dawa Party is part of a stew of factions in a country that has found it elusive to build an effective coalition government following Hussein’s overthrow.

In June, al-Maliki told The Huffington Post that Iraq might ask Iran to begin air strikes against Islamic State militants unless the U.S. did so. He also expressed hope that Iraq would not become involved in a sectarian war. “Shias are not against Sunnis and Sunnis are not against Shias,” he said.

Q: How has the U.S. responded to the selection of al-Albadi?

With a certain amount of relief that al-Maliki’s reign may be coming to an end. Secretary of State John Kerry, speaking to reporters during a visit to Australia, said a new government “is critical in terms of sustaining the stability and calm in Iraq,” according to the AP. He added that “our hope is that Mr. Maliki will not stir those waters.”

Q: Back up for a moment and remind me what the fighting in Iraq is about.

A: While the United States withdrew all of its troops from Iraq at the end of 2011, fighting there never really stopped. In fact, last year was the deadliest since 2008. Tensions between the majority Shiites, who lead the country, and the minority Sunnis never went away.

The other big factor fueling this current fighting has to do with Iraq’s troubled neighbor, Syria, which is still in the midst of a civil war. Mostly Sunni rebels are trying to oust a regime dominated by members of a Shiite sect. Islamic State fighters have been active in that conflict and are taking advantage of the breakdown of state authority. Militants control territory on both sides of the Iraq-Syria border and are able to move back and forth between the two countries.

Q: What exactly is the Islamic State?

The Islamic State was formerly known as al-Qaida in Iraq (AQI), and was the leading Islamist extremist group during the Iraq War. It was renamed to reflect its growing ambitions in Syria and Lebanon. The group controlled large parts of Iraq during the war until the U.S. military and Sunni militias defeated it during the post-2006 “surge.” This past February, the group was thrown out of al-Qaida for being too violent.

Q: Why is the fighting now taking place in Kurdistan?

A: Earlier, the Kurdish forces in northern Iraq were able to fight off the Sunni militants. But Islamic State fighters launched a major offensive seizing control of the country’s largest Christian town and sending thousands of civilians fleeing in panic. Kurdish officials have been pleading for international help to prevent losing control of the 650-mile border between their semiautonomous region and territory controlled by Sunni extremist militants.

Q: Who is the Islamic State targeting in northern Iraq?

A: The Islamic State has targeted members of numerous minority groups they consider apostates in the region, including Christian nuns, Turkmen and Shabaks, according to Human Rights Watch. Thousands of members of the minority Yazidi sect are currently working their way down a mountaintop outside the town of Sinjar after being trapped there by militants with little food or water.

Q: As a refresher, remind me how to distinguish among the groups at loggerheads in Iraq.

A: The three major sects in Iraq are the Sunnis, Shiites and Kurds. Sunni and Shiite Muslims share many beliefs and most of their practices coincide with one another: the belief of one God, the Prophet Muhammad, fasting during Ramadan and the other basic principles of the religion.

The split dates back to 632, the death of Muhammad and who should take over as leader. The majority, who became known as the Sunnis, backed Abu Bakr, a friend of the Prophet and father of his wife Aisha. Others thought the Prophet had anointed Ali, his cousin and son-in-law—they became known as the Shia, a contraction of “shiaat Ali”, the partisans of Ali. Abu Bakr’s backers won out, and today 80% of the worlds Muslims are Sunnis.

The Kurds are a largely Sunni Muslim, non- Arabic people with their own language and culture. Most live in mountainous areas of Turkey, Iraq, Iran, Armenia and Syria –generally known as Kurdistan (“Land of the Kurds”).

According to a recent study by the Pew Research Center, Shiites make up about 50 percent of the Iraqi population. Neighboring Iran has the largest Shiite population in the world-between 90% and 95% of Iranian Muslims identified themselves as Shiites.

Kurds make-up about 15% of the remaining population and control about a fifth of the Iraq’s territory in the northern part of the country.

Q: And how have their efforts gone at working together to lead the country?

A: Not well. An attempt at putting together a national unity government failed when Sunnis and Kurds walked out of the first session of Iraq’s new parliament. There’s a lot of bad history to overcome. During Saddam’s dictatorship, Sunnis dominated the political regime, persecuting and excluding Shiites and Kurds.

The overthrow of the regime and the arrival of U.S. forces brought with it a political upheaval in the country. Kurds gained autonomous control of the northern part of the region, which includes the oil fields around the city of Kirkuk—a prime source of potential wealth.

The Maliki government brought Shiites into control of the government for the first time but the prime minister has refused to strike an inclusive tone and include Sunnis. Both the Sunnis and the Kurds reject Maliki’s leadership. In July, the Iraqi parliament selected Massoum, a Kurdish politician, to be the country’s new president. The move was seen as an attempt to present a more united front against the Islamic militants.
wcpo.com