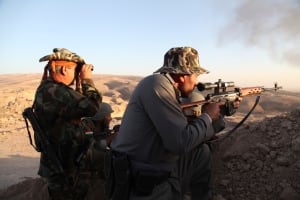 Iraq’s new president on Monday snubbed the powerful incumbent Prime Minister Nouri al-Maliki and nominated the deputy parliament speaker to form the new government, raising fears of more infighting in the government as country faces the threat of Sunni militants in the north.

In a televised address Fouad Massoum gave Haider al-Abadi 30 days to form a new government and present it to parliament for approval, expressing his hope he would succeed.

Al-Maliki responded Monday, saying the president’s decision to name a replacement for him was a “dangerous violation” of the constitution.

Delivering a speech broadcast on television and flanked by political allies, he promised “we will fix the mistake”.

Al-Abadi, who pledged to form a government to “protect the Iraqi people,” was nominated for the post by the Iraqi National Alliance, a coalition of Shia parties that al-Maliki’s State of Law is part of, but has turned against him.
Al-Maliki’s Shia-dominated bloc won the most parliament seats in April elections and the prime minister sees himself as rightfully keeping the post. In a midnight speech, al-Maliki said he was filing a suit against the president for neglecting to name him prime minister by Sunday’s deadline and all but demanded he be renominated.

Critics say al-Maliki, a Shia, contributed to the crisis by monopolizing power and pursuing a sectarian agenda that alienated the country’s Sunni and Kurdish minorities.

Al-Abadi’s nomination came hours after al-Maliki deployed his elite security forces in the streets of Baghdad, partially closed two main streets — popular spots for pro and anti-government rallies — as hundreds of his supporters took to the streets.

“We are with you, al-Maliki,” they shouted, waving posters of the incumbent premier, singing and dancing.

Mohammed al-Ogeili, a lawmaker from al-Maliki’s list, rejected the nomination of al-Abadi arguing that this move “runs against the constitution” because al-Maliki’s party is the largest bloc and the National Alliance has no right to present any candidate.

“This decision would lead the country to a big problem and the president bears full responsibility for this situation,” he told The Associated Press.

Also Monday, senior U.S. officials said the Obama administration, which launched airdrops and airstrikes last week to support Kurdish and Iraqi forces battling militants from the Islamic State in Iraq and Syria group, has begun directly providing weapons to the Kurdish peshmerga forces who have started to make gains against the al-Qaeda breakaway group.

Previously, the U.S. had insisted on only selling arms to the Iraqi government in Baghdad.

The officials wouldn’t say which U.S. agency is providing the arms or what weapons are being sent, but one official said it isn’t the Pentagon. The CIA has historically done similar quiet arming operations.

The officials spoke on condition of anonymity because they were not authorized to discuss the operation publicly.

The move to directly aid the Kurds underscores the level of U.S. concern about the ISIS militants’ gains in the north, and reflects the persistent administration view that the Iraqis must take the necessary steps to solve their own security problems.

A senior U.S. State Department official would only say that the Kurds are “getting arms from various sources. They are being rearmed.”

To bolster that effort, the administration is also very close to approving plans for the Pentagon to arm the Kurds, a senior official said. In recent days, the U.S. military has been helping facilitate weapons deliveries from the Iraqis to the Kurds, providing logistic assistance and transportation to the north.

The additional assistance comes as Kurdish forces on Sunday took back two towns from the Islamic insurgents, aided in part by U.S. airstrikes in the region. U.S. President Barack Obama authorized the airstrikes to protect U.S. interests and personnel in the region, including at facilities in Irbil, as well as Yazidi refugees fleeing militants.

U.S. Defence Secretary Chuck Hagel, speaking to reporters here, said the airstrikes “have been very effective from all the reports that we’ve received on the ground.” He declined to detail how or when the U.S. might expand its assistance to Iraq, or if military assessment teams currently in Baghdad would be moving to a more active role advising the Iraqi forces.

“We’re going to continue to support the Iraqi security forces in every way that we can as they request assistance there,” Hagel said during a news conference with Australian Defence Minister David Johnston.
cbc.ca