Biography of President Fuad Masum, new President of the Republic of Iraq

Biography of President Fuad Masum, new President of the Republic of Iraq 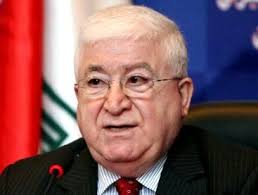 Baghdad (news) .. Dr. Fuad Masum, President of the Republic of Iraq, a liberal orientation in spite of affiliation to a religious family great. He is the son of Sheikh Mohammed Mullah Fuad Masum, the head of the Kurdistan scientists and advocates of rapprochement sectarian and religious coexistence. Koya was born in 1938. Is married and has five daughters. learning at the University of Al-Azhar in Cairo, and received a doctorate degree in Islamic philosophy, including in 1975, and his thesis was about the philosophy of Ikhwan al-Safa and ends. He played a prominent role in the Kurdish movement time studying in Cairo, and it was the announcers broadcasting Kurdish, which was established in Cairo in 1958 with Sheikh Omar and earnest last sheikh of the gallery Kurds in Al-Azhar Al-Sharif. , and after his return to Kurdistan participated in the struggle of the Kurdish manner made ​​him the most prominent Kurdish movement contemporary, and a member of the Iraqi Council of Representatives since the 2005 elections for the province of Baghdad on the list of the National Alliance of Kurdistan. , a leader of the Patriotic Union of Kurdistan (PUK), which was nominated today for the presidency of the Federal Republic of Iraq. As for the features and functionality that positions and taking her d. Fuad Masum, former professor in the Faculty of Arts at the University of Basra, a lecturer at the Faculty of Law and the Faculty of Education at the University of Basra, also, the first prime minister of the Kurdistan Regional Government of Iraq in the early nineties, as well as the first president of the National Council of Iraq after the fall of the dictatorial regime, as well as Chairman of the Board in writing the Iraqi constitution in beginning. was one of the founders of the Patriotic Union of Kurdistan (PUK) in 1975, and president of the National Alliance of Kurdistan in the Iraqi parliament currently, and has long experience in the field of political, social and cultural, and has a popular figure among all Iraqi political blocs and in particular independent of them, as well as his Academy with all Iraqis, good and excellent especially academia … where cooperation with them outside of Iraq at the time of the former regime before 2003 and participated in many seminars and conferences that were related to the future of Iraq. longer infallible personal political neutrality … and did not know his subservience to one of the countries has a good reputation and good relations with All countries of the civilized world, free and well-respected distinguished by its officials and prominent political personality and most notably the Arab states and neighboring Iran and Turkey, and a popular figure among all Kurds, especially among family Barzani, as well as the character known as the fairness and integrity and Atzanha, did not enter into conflict with the parties and the Iraqi political blocs … whether they are Arab or Kurdish or Turkoman or other. The companion of former President Jalal Talabani, and very close to the political approach in dealing with the neutral position and all the Iraqi parties. / End