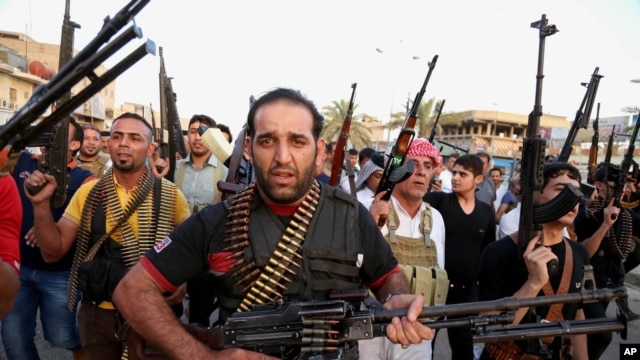 A global human rights group is accusing Iraqi security forces and militias associated with the government of unlawfully executing at least 255 prisoners in the last month.

The group said most of the victims were Sunni prisoners who were fleeing the Islamic State of Iraq and the Levant and other armed groups. At least eight of the murdered prisoners were less than 18 years old.

The accusations come as violence continues to spread across Iraq, which is sending about 4,000 volunteers to the embattled city of Ramadi, west of Baghdad, to support government forces battling Sunni militants.

The central government in Baghdad has condemned the seizure and demanded the Kurds immediately withdraw.

Kurdish forces took control of Kirkuk and other northern areas nearly a month ago.

And in a further split between Kurds and the government, Kurdish politicians formally suspended their participation in Prime Minister Nouri al-Maliki’s Cabinet, calling him “hysterical.” The prime minister has accused Kurds of harboring Sunni extremists who have taken over much of northern Iraq and threaten Baghdad.

The Kurds have an autonomous zone in northern Iraq, and many have an eye on independence.
gdb.voanews.com